Who is behind Geetha Govindam’s controversial poster?
Published on Jul 22, 2018 8:45 pm IST 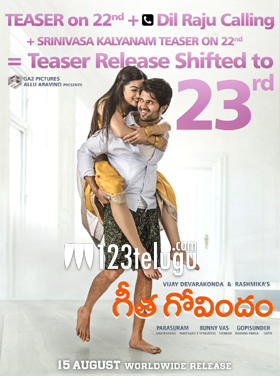 Yesterday, the makers of Vijay Deverakonda’s upcoming romantic entertainer, Geetha Govindam, released a controversial poster. The makers said that the film’s teaser, which was supposed to be out today (July 22), has been postponed to July 23 after receiving a call from Dil Raju.

The poster claims that Dil Raju had requested Geetha Govindam’s team to postpone their teaser by a day since the teaser of his latest production, Srinivasa Kalyanam, too, was scheduled for release today. Geetha Govindam team’s gesture could be on a friendly note, but it kicked off an unnecessary controversy.

Twitterati didn’t find Geetha Govindam team’s cheeky poster amusing and everyone started criticizing them. “They should have kept their mutual understanding a secret instead of publicly belittling one of the top producers like Dil Raju,” said a critic. What baffled everyone was the fact that senior producer Allu Aravind is presenting Geetha Govindam. “Did the poster have Allu Aravind’s approval?,” wondered a netizen.