‘Alias Janaki’ is an action entertainer that is going to release soon.Venkata Rahul and Anisha Ambrose will be seen in lead roles in this movie. Shravan has composed this audio album and Daya has directed the film. Neelima Thirumalasetty is producing this film on Sanghamitra Arts banner. The audio album has been launched recently in Hyderabad, so let us check out the songs now.

‘Kaadhal Prema’ is a very addictive and beautifully rendered melody. Shravan has taken care of the vocals and the music. The tone of his voice is a perfect match for this song. Music is refreshingly fresh. Sweccha’s lyrics are neat. ‘Kaadhal Prema’ will grow on you slowly, but surely. Thumbs up for this track.

‘Maarinadhe’ starts off with beautiful instrumental music from Shravan. A very clever use of the flute has been made. Haricharan’s voice takes over from there and lends the song a very pleasant feel. This song has a very soothing quality, both in terms of lyrics as well as the music. Native instruments can be heard predominantly. This is a song that will slowly grow on you, after you listen to it for a couple of times.

Koncham Koncham’ is a romantic duet. Shravan and Kavya have taken care of the vocals and they have done a good job. Kavya is particularly effective and her voice gives the song a very romantic feel. Sweccha’s lyrics are nice. A good use of the guitar has been made for this song’s music. ‘Koncham Koncham’ is a pleasant and slow melody that is quite easy to like. The first three songs of this album are very promising.

‘Aranyamantha’ is a sad, solo number. Balaram Iyer has taken care of the vocals for this song and he has done a decent job. Krishna Kanth’s lyrics are powerful and have good depth. They convey powerful emotions like revenge, anger etc. Music is apt for the mood of the song. This song will work if it has good visuals.

‘Santhalo Perigina Sundari’ is the item song of this movie. Ram Narayan has composed the music for this song and Shravana Bhargavi has taken care of the vocals. There is a mass touch to the music. Surendra Krishna’s lyrics are slightly provocative This is just an average song that is aimed at the front benchers. 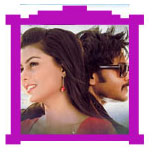 ‘Kaatuka Kannula’ is a solo song that has been penned by Karthik Kodakadha and Ashwin. Sai Charan has taken care of the vocals. Music is a fusion of Indian and western instruments and it is decent. Lyrics complement the mood of the song well. Overall, this song ends up being an ok number that is easy to listen to. But nothing spectacular like the first three songs of this album.

‘Alias Janaki’ has surprisingly good and melodious music. Shravan has come up with a refreshingly impressive album and the songs have a very pleasant and soothing quality. The best songs from this album are ‘Kaadhal Prema’ , ‘Maarinadhe’ and ‘Koncham Koncham’. If you haven’t already listened to the songs of this movie, do listen now. With a lovely audio album, ‘Alias Janaki’ now has a very nice chance of making a good impact at the Box Office.