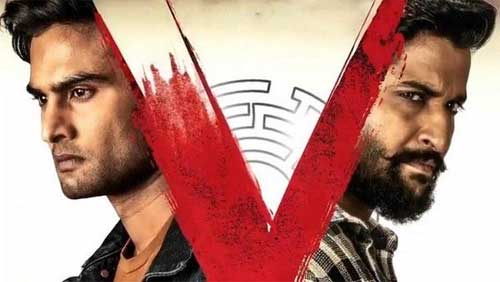 The complete audio of Mohankrishna Indraganti’s V is finally out in the open. Composed by Amit Trivedi, let’s now see how this album turns out to be.

Analysis: The first song is Vastunna Vacchestunna which hits you the moment you listen to it. The song has a haunting theme which is so nicely composed by Amit Trivedi. Shreya Ghoshal’s hook up Raaga and the way she sings the number has romance, urge, and cooks up so many emotions. The orchestration is thumping and gives you a kick right away. This song will be an even bigger hit once the film is out.

Analysis:The second song in the album is Ranga Rangeli sung by Yasin Nizar and Nikita Gandhi. A fast based number with some good beats and energetic singing. There is nothing much to talk about apart from Nikita Gandhi’s singing. This song might click once you watch the visuals on screen.

Analysis:The third song in the album is Manasu Maree which is the best of the lot. A romantic track with techno beats, this song too is a solid hit the moment you listen to it. Amit Trivedi’s voice makes all the difference to this soothing number. It is modern, poetic, and also haunting at the same time and if the visuals are good, things will go to another level.

The fourth and last song in the album is Touch Me Now. Amit Trivedi gives this song high beats and the energetic singing by Sharvi Yadav is just amazing. This song has a disco feel and lifts your spirits right away. The hookup line, Touch Me Now is well balanced and the programming is super cool and makes up for an endearing song to hear.

On the whole, the album of V is quite modern and at the same time has a classical touch to it. The emotion and mood of the film are carried through the songs and Amit Trivedi has done a solid job with the songs. Manasu Maree and Vastunna Vacchestunna are already solid hits but the other songs are also good making this a foot-tapping album. You will like them, even more, when the film is out.