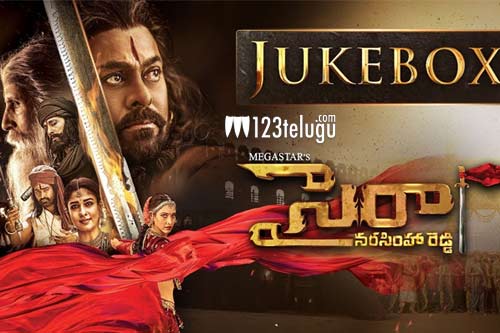 The complete audio of Sye Raa is finally out in the open. Composed by Amit Trivedi, let’s now see how this album turns out to be.

Analysis:  The album kick starts with Jaago Narasimha Jaagore, a celebratory number titled Jaago Narasimha Jaagore. The entire song is filled with happiness as everyone is celebrating the birth of a special person. Shankar Mahadevan and Anurag Kulkarni sing this number which has good orchestration. More than the lyrics, the patriotic and earth lyrics by Sirivneela Seetarama Sastry are superb and evoke a lot of emotion. Such songs will be even better to listen once you watch the lavish visuals.

Analysis:  The second song is the romantic number, Andam Ankitam. More than the romance, this song portrays the love and affection both Narasimha Reddy and his wife share for each other. This song is sung beautifully by Shashaa as she brings a lot of depth to the song. Amit Trivedi has kept the composition minimal and let the lyrics do all the talking. Once again a montage number, this song will be filled with great visuals.

Analysis: The third and the best song on the album is O Sye Raa, the title track. Everything about this track is just superb and gives you goosebumps the moment you listen to it. The specialty of this album is that Amit Trivedi has kept it sober and yet patriotic and aggressive. This song is quite special as Sunidhi Chauhan’s singing and the drum work are too good. The song has a pan India appeal and will give you every bit of a patriotic feel the moment you watch Chiru’s heroics on screen.

Analysis:  The last song on the album is Swaasalone Desame, a complete patriotic album which seals the album with a very emotional note. The song is all about the motherland and how one should come forward and serve it. The song given so much about the patriotic feeling in everyone and comes at a very crucial and emotional moment in the film. Hari Charan’s singing is good and also the lyrics by Chandrabose are quite good. This song will haunt you more once you watch it on screen.

On the whole, the album of Sye Raa is a completely situational album which takes the story ahead with its lyrics and compositions. Every song is special in itself as Amit Trivedi has given a lot of heart and soul which evoke good emotions and patriotism. This is not the regular commercial album and is the one which will impress you once you watch the lavish and beautiful visuals on screen. For now, the makers have got the music right which will surely take the narrative to another level.