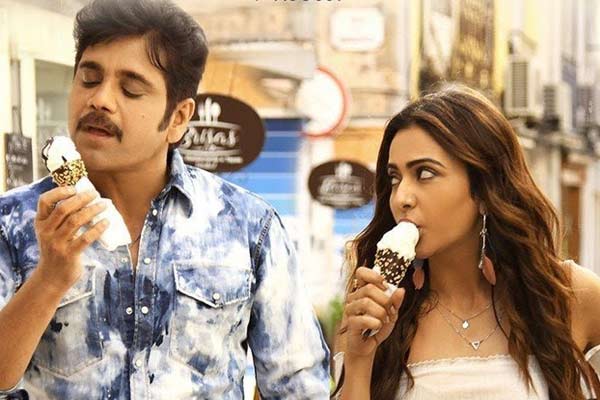 The complete audio of Manmadhudu 2 is finally out in the open. Composed by the talented Chaitan Bhardwaj, let’s now see how this album turns out to be.

Analysis: The first song on the album is Hey Menina sung by the music director Chaitan Bhardwaj himself. This number has stylish techno beats and nice rhythm. Chaitan sings it with a lot of style and makes the lyrics sound enjoyable. This is Nagarjuna’s intro song in the film and hits you right away the moment you listen to it. This number has already caught on well and with Nag’s stylish look and beautiful locales, it will sound even better on screen.

Analysis:  The second song is Maa Chakkani Pellanta which is a wedding number which showcases the joys of marriage. Chaitan chooses Chinmayi and Anurag Kulkarni for this song and they make this number quite lively with their peppy energy. The song is quite classy and has been kept simple as the set up of the film is aborad. The music is easy on the ears and this song will also impress you after watching the beautiful visuals on screen.

Analysis:  The third and last song on the album is Naalona which is once again sung by Chinmayi. What catches your attention apart from Chinmayi’s soulful singing is the melodious lyric by Subham Vishwanath. They are modern and have a lot of warmth in it. Be it the tune or composition everything has been kept classy and stylish. This song is one of the best for Chinmayi in recent times and helps the love blossom between the lead pair in the film.

The makers of Manmadhudu 2 have kept the album quite simple with just three songs which are different from each other. Chaitan Bhardwaj has shown promise yet again as he kept the songs trendy and soothing at the same time. All the three songs are decent and will take the narrative ahead. These are the kind of songs which will be even more enjoyable when you watch them on screen. So, once the film releases, these songs will be even more popular.