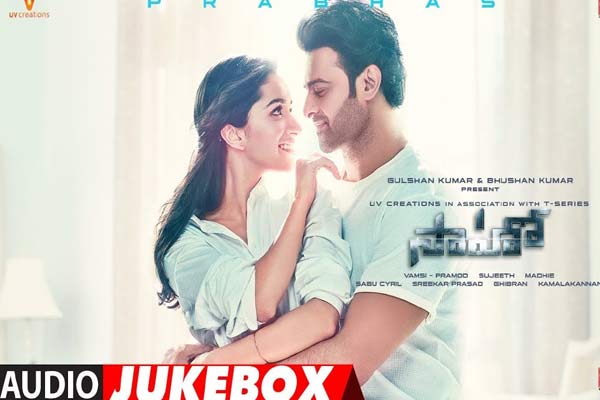 The complete audio of Saaho is finally out in the open. Composed by different musicians, let’s now see how this album turns out to be.

Analysis:  The album kick starts with Psycho Saiyaan which sets the mood right for a trippy and groovy dance number. Bollywood composer Tanishk Bagchi has composed the song which has a techno beat. The lyrics penned by Sreejo are Tinglish and funky. Dhvani Bhanushali has crooned the song in a very stylish manner and sets the tempo high right away.

Analysis:  The second song is the romantic number, Ye Chota Nuvunna. It hits you right away the moment you listen to it. Punjabi singer, Guru Randhava sings and composes this song which has a unique and stylish beat. The lyrics are soothing and the manner in which the lyrics gel with the tune is the best part. The sound is easy on the ears and is the best song of the album.

Analysis: The third and last song on the album is Bad Boy which is a stylish pop number sung and composed by Baadshah. The song is made in true hip hop style and Baadshah’s rap and singing make the song tick. The lyrics are once again Tinglish and have been set nicely well in Telugu. The tune is quite catchy and makes you groove to the song right away. This song hits you, even more, when you watch the stylish visuals on the big screen.

Analysis:  The last song on the album is also a romantic number called Baby Won’t you tell me. Composed by Shankar Mahadevan, this song is also pretty good and gives a romantic feel. The singing takes the cake as the composition is just about okay. Siddharth Mahadevan and Swetha Mohan croon this number in a very romantic manner and the lyrics are also quite impressive. The tune will impress you more once you listen to the song multiple times.

On the whole, the makers of Saaho have roped in top musicians of India for various songs in the album. Every song is different from each other and has been composed on a Pan-India level. There is no particular favorite as all the songs are good and have been shot lavishly. With such a good and peppy album, the makers have won half the battle and give another reason for the audience to look forward to the big movie.