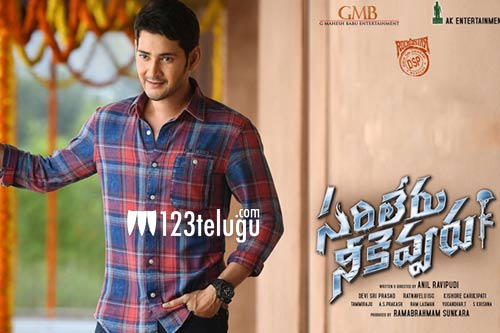 The complete audio of Sarileru Neekevvaru is finally out in the open. Composed by Devi Sri Prasad, let’s now see how this album turns out to be.

Analysis:  The first song in the album is Sarileru Neekevvaru’s title song. Apart from composing the song, Devi Sri Prasad has also penned inspiring lyrics. It is a perfect tribute to the selfless sacrifices of the Indian Army. The Macedonian Symphonic Orchestra’s thematic symphony is one of the main highlights of the song. The chorus does a good job as they mouth the patriotic lines in a superb manner along with Shankar Mahadevan’s soulful singing. Needless to say, the song will click even more once the film is out.

Analysis:  The next and best song in the album is Suryudivo Chandrudivo. Devi Sri Prasad bounces back with a breezy melodious number this time around. Suryudivo Chandrudivo explores beautiful relationships, especially between Mahesh and Vijayashanthi. The depth in Ramajogayya Shastry’s lyrics elevates heroism and also are touchy. Bollywood singer B Praak makes an impressive debut with this song which hits you right away the moment you listen to it and is a solid hit.

Analysis: The third song from the film is He’s so cute. DSP has once again given a peppy tune this time as the lyrics are naughty and Rashmika looks adorable in the video. She is also seen showcasing her dancing steps in the number. The song is sung by Madhu Priya and she does a superb job with the song as her singing is quite energetic and lively. The song comes at a crucial time in the film and its Tik Tok version has already gone viral now.

Analysis:  No album is complete without a mass number and Sarileru also has Mind Block. Aimed directly at the masses, this song is a full-on masala number in true DSP style. The rap by Blazee, double meaning lyrics, and tune has been set in a way that it will make you groove instantly. The song is said to have special steps from Mahesh and will be an even bigger craze when the visuals are out. For now, DSP keeps the track lively and full-on entertaining.

Analysis: The last song in the album is Dang Dang which is a special song featuring Tamannah. This is the first song of the film and has a nice and catchy beat. Nakash Aziz, and Lavita Lobo make this number a special one and the Hindi lyrics are also quite fun. This song will hit you more the moment you listen to it multiple times.

DSP has been on the receiving end because of his music score in the last few months. The same happened with Sarileru too as the initial response of the songs was not that great. But as time passed by, DSP started churning out good number and slowly the album became super popular. Suryudivo Chandrudivo, He’s So Cute and Mind block are our picks. Finally, one can say that DSP has given a good album and all the songs will be even bigger hits once the film is out.