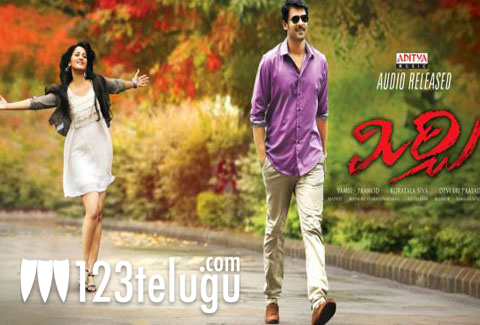 The audio launch of Young Rebel Star Prabhas’s ‘Mirchi’ took place yesterday evening in Hyderabad. The film’s music has been scored by Devi Sri Prasad, who is currently enjoying a very good run. Ramajogayya Sastry has penned the lyrics for all the songs in the album. Prabhas will be seen with Anuskha and Richa Gangopadhyay and the movie is currently getting ready for a Feb release. ‘Mirchi’ has 7 songs in all . Let us see how the audio album is.

This is an emotional number that will most likely be set in a village, once the hero returns back to stand up for his people. Kailesh Kher has done a great job with the vocals and DSP’s music is perfect for the emotion in the song. A good use of traditional instruments has been made. Ramajogayya Sastry’s lyrics are pretty good. A nice song to listen to and perhaps, a very crucial one in terms of the film’s story.

‘Barbie Girl’ is a peppy 4 minute duet that has been rendered with good energy by Jaspreet Jasz and Suchitra. Ramajogayya Sastry’s lyrics are ok. The drum beats will remind you of ‘Reppala Pai’ from Nagarjuna’s Dhamarukam. Music is contemporary and peppy, with percussion instruments dominating the score. Overall, this is a song that makes a very good impression instantly.

‘Darlingey’ is a mass number that is aimed squarely at the front benchers. Devi Sri Prasad and Geetha Madhuri have done a good job with the vocals. Ramajogayya Sastry’s lyrics just do the job. DSP’s music for this number is sufficiently rustic and catchy. After you listen to this song for a couple of times, you will be hooked. With good visuals, this song has the potential to become a mass hit.

‘Idhedho Bagundhe’ is a cool and contemporary romantic duet. Vijay Prakash and Anitha have taken care of the vocals and they have done a decent job. Ramajogayya Sastry’s lyrics are neat. The song will most likely be shot in exotic locations, with beautiful visuals. DSP’s music is melodious and the pace is nice. A very good song overall and the kind that will appeal immensely to ‘class’ sections of the audience.

This is a bit number that has been sung by Chinna Ponnu. This is the kind of song that will most likely be used as a filler

This short bit number is a perfect mirror image of the ‘Pandagala’ song from this same album. While there is hope and positive energy in that number, this song is melancholic and has despair written all over it. This song will probably used as a filler during some of the sad moments in the story.

‘Yahoon Yahoon’ will most probably be used as Prabhas’s introduction number in the movie. The song has been sung by Mika and his performance is good and energetic. Ramajogayya Sastry’s lyrics are appropriate for a hero’s introduction number. Music is easy to like and peppy. Percussion instruments dominate the sound. A pretty good number overall.

DSP has started off his 2013 innings on a pretty good note with the audio album of ‘Mirchi’. He has composed some hummable numbers for this film and though he has not experimented too much, the tunes are all easy to appreciate. In other words, they are safe and simple. ‘Idhedho Bagundhe’,’Pandagala’, ‘Barbie Girl’ and ‘Darlingey’ are my picks from this album. Prabhas has a good album on his side and that should help the film at the Box Office.