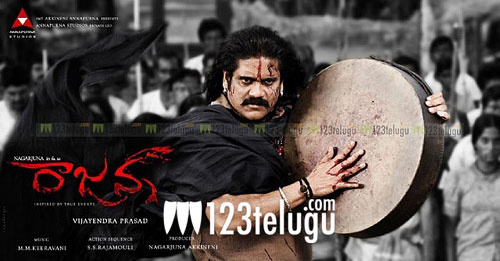 Rajanna is King Nagarjuna’s upcoming period drama. The movie has been directed by Vijayendra Prasad, father of S.S Rajamouli. Music has been composed by Keeravani and the audio album was released into the market without any fanfare. Let us see how the songs stack up.

This is a slow song that is rendered with a lot of emotion by the singers. Sivadatta’s lyrics are poetic and have a lot of depth.

Keeravani’s music is classy and has a nice rustic feel that is in keeping with the theme and situation. The song is about the sun and its effect on the various aspects of human life.

This is another rustic tune that is slow and melodious. The singers have done a good job with the vocals.

Keeravani’s music is perfectly in sync with the feel and mood of the song. The song is about mother earth and how labourers are dependent on her. Lyrics are nice and have a very heavy Telangana influence.

This song is a soulful rendition that describes the angst of people suffering at the hands of the Razakars in the Telangana region.

Keeravani has done a magnificent job with the vocals and you can actually make out the anguish in the number. Music takes a backseat and this song gives primary importance to lyrics. This song will look terrific on screen.

This is a romantic folk duet with some peppy music. Deepu and Shravana Bhargavi have rendered the song with a lot of energy and enthusiasm.

Suddala Ashok Teja’s lyrics are apt for the song and carry a heavy Telangana influence. This is probably a duet that involves Rajanna and we can expect a good and colourful picturization. Keeravani’s music is classy and peppy.

This is a melodious song that has some very heavy carnatic music influence.

Keeravani’s music is slightly repetitive but it is ok. Anantha Sriram’s lyrics are good. All the singers have done a good job.

This is a short bit number with some

good lyrics from Anantha Sriram. Music is soulful and takes some time to get used to.

This is a sad number that is rendered well by Shwetha Pandit.

Music is slow and rustic. In fact, the music just plays a supporting role. Lyrics are the key and they are good. These songs will take a lot of time to get used to.

This is a very earthy folk bit number. Mettapalli Surender and

Chaitra are totally in their element and the song proceeds along at a good pace. Native instruments and beats dominate this song.

This is a very powerfully written song and is sure to be a highlight in terms of picturization.

Revanth has done a good job with the vocals and his performance captures the intensity and force in the lyrics. Keeravani’s music is rousing and will stir feelings deep within your heart. Looking forward to watch this song on screen.

This is a short bit number that is hummed beautifully by

This is a short song that is totally dominated by Sudarshini’s vocals.

Chaitanya Prasad’s lyrics are poetic and there is a heavy Telangana influence. Music takes a backseat once again in favour of the singers.

Malavika did a good job with the lyrics in this sentimental song. Sivadatta’s lyrics are

good and there is a good change in pace in the vocals. This song will take some time to get used to and will be a good number to listen to.

Verdict : This is not a regular commercial album, so do not expect to find romantic duets and item numbers. The songs have a very earthy feel and the music is classical and is dominated by native instruments. People who are not familiar with Telangana slang and customs will take some time to get the hang of the lyrics. Some of the songs are very pleasant to listen to. Overall, this is an album that is very tightly integrated with the movie and the story and the songs will start becoming popular once the movie releases. Listen to these songs without any expectations. Keeravani did a fabulous job to come up with a musical album that has ‘Telangana’ written all over it.