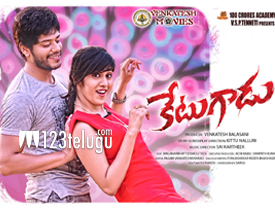 Ulavacharu Biryani fame Tejus and Chandini Chowdary have teamed up for a romantic entertainer titled Ketugadu. Directed by Kitttu Nalluri, this film has hit the screens today. Let’s see how it is.

Chandu (Tejus) is a conman who steals swanky cars for a living. One fine day, he spots Akira (Chandini ), the only sister of a rich businessman Prakash( Rajeev Kanakala)and falls in love with her.

As time passes by, Chandu receives a surprise call from Prakash who offers him huge money to kidnap his sister. Twist in the tale arises when Ajay (Ajay), an industrialist also tries to kidnap Akira for his own personal gains.

Why is everyone trying to kidnap Akira ? What is their motive behind all this ? To know answers to all these questions, you need to watch the film on the big screen.

The pre-climax is the major asset of the film. The various twists that are revealed during this time sets the pace of the film well. Sapthagiri and Praveen do a wonderful job and all their comedy scenes have come out well.

Young actor Tejus is decent in his role and Chandini Chowdary’s glamour quotient is yet another attraction in the film. Both Rajeev Kanakala and Ajay deliver superb performances in their characters. The background score is well composed and a couple of songs looked nice on screen.

The story line of the film is a big minus. Many movies with these type of scripts have already been dealt in the past. The film is quite predictable and none of the important scenes evoke much interest. The chemistry between the lead pair is also not that convincing. A couple of untimely songs hamper the free flow of the film.

The first half of the film is a big let down. Many unnecessary scenes take center stage and the tempo of the movie drops drastically. The climax of the film is a tad too long and many characters are needlessly introduced adding more confusion to the proceedings.

Cinematographer M.B. Joshi did a decent job with his visuals. The background score is apt and the music score is OK. Many scenes could have been easily chopped off as they increase the run time. The makers have not compromised on the production values and deliver a decent product.

Director Kittu Nalluri does an ok job for his first film. Even though the story is quite routine, the way he has narrated the film at crucial points is impressive.

On the whole, Ketugadu is just another kidnap drama which is infused with routine comedy, fights and a couple of twists. The pre-climax episode and decent performances by the principal cast are the only saving grace for this film which can be watched when it is aired on television.