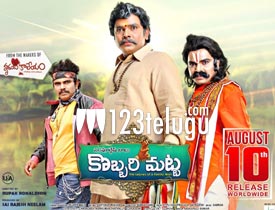 Kobbari Matta has been in the making for over two years now. After a lot of struggles, the film has finally hit the screens today. Let’s see whether Sampoornesh Babu impresses us or not.

Rayudu(Sampoornesh Babu) is the head of his village and lives with his three wives. They lead a happy life until Androidu(Sampoornesh Babu) comes into the picture and creates a havoc. Who is this Androidu and what is his connection with Rayudu.To know these answers you need to watch the film on the big screen.

The film is completely an over the top comedy and major credit should go to Sai Rajesh for even thinking of a story like that and having Sampoornesh Babu do three roles. The humor part in the film is very good and audience gets what they expect from Sampoo.

Coming to the man himself, Sampoornesh Babu Babu has done an amazing job in the film. His three minute non stop dialogue, funny dances and mass dialogue delivery, the burning star has performed with utmost ease and the audience will just love him. He is showcased in three roles and Sampoo delivers hilarious fun in all his three avatars.

Mahesh Kathi gets a hilarious role and the satires executed on him work well. Shakeela gets a key role and she is decent. The songs in the film come at regular intervals and they too evoke good comedy.

The film will only be liked by those who are clearly aware of Sampoornesh Babu and love over the top comedies. For the rest of them, the film will be a silly comedy with no logic at all.

After the first fifteen minutes, things become a bit over the top until the interval point. All the scenes which are brought in have no sense during this time.

Production values of the film are neat and give a good vibe. Music is impressive as all the numbers have been kept peppy. Dialogues are hilarious and they standout throughout the film and evoke superb laughs. Screen play by Sai Rajesh is superb as he cleverly induced comedy episodes for every ten minutes to keep the fans entertained.

Coming to the director Rupak Ronaldson, he has done a sincere job with the film. Even though, there is not much logic in his story, his narration was decent as he concentrated on the fun part and showcased Sampoornesh Babu in a hilarious note.

On the whole Kobbari Matta is an out and out comedy caper which will only thrill Sampoornesh Babu’s fans. But the regular audience will find it difficult to digest as it has no logic and seriousness. These films are made for sheer entertainment so watch them with that intent and Sampoo will not disappoint you at all.