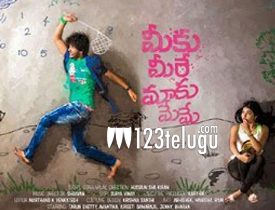 Hussain Shah Kiran, who wrote the story for NTR’s Nannaku Prematho has now turned director with the film Meeku Meere Maaku Meme. The youthful entertainer has hit the screens today. Let’s see how it is.

Aadi(Tarun Shetty) is a happy go lucky guy who falls in love with his college mate Priya(Avantika). As time passes by, even Priya accepts his love and the couple start spending some cozy times together.

Twist in the tale arises when Priya starts doubting Aadi’s sincerity in their relationship. She confronts him and a huge fights ends up in the couple’s break up. Rest of the story is as to how things fall back into place one after the other and the couple gets back on track.

One of the major assets of the film is the fun generated trough Tarun and Kiriti’s characters. The proceedings move on a positive note whenever these guys are on screen. The chemistry between the lead pair is quite endearing and the innocence that is generated through their love track looks good on screen.

The way the characters have been introduced and the effect of love affairs in this changing era have also been showcased well. Tarun Shetty makes an impressive debut and is good through out the film.

As said earlier, Kiriti is yet another highlight of the film. He is funny as the side kick and generates good laughs in his role. Avantika too is decent in her role and ably supports the cast.

Even though the conflict point in the film is good, the execution makes things a bit difficult. There was so much scope for emotions during the second half which the director failed to utilise. Heroine’s character lacks clarity what soever. Certain cinematic liberties that have been taken look over the top.

By the time the film reaches its climax, the so called drama gets over the top and things go haywire. Two songs in the second half cause a major disturbance to the proceedings. Also, the way things deviate from the actual story line lets the film down in many places.

Coming to the director Hussain Shah, he has done a decent job for his debut film. Even though he looses track with his irregular screenplay and execution, he manages to narrate the film with decent fun most of the times.

Overall, Meeku Meere Maaku Meme is a decent attempt from debutante director Hussain Shah. Even though he falters in executing the love story in a clearer way and misses out on major emotions, he narrates the film with ample comedy and entertainment. If you go in without any expectations and ignore the lack lustre story line, you might end up enjoying this film.