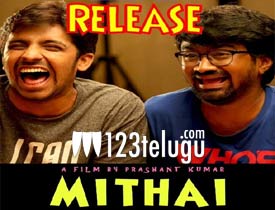 Mithai garnered decent buzz and anticipation after the trailer of the film struck a chord with the viewers. The film stars Rahul Ramakrishna and Priyadarshi in the lead roles. Touted to be a dark comedy, this film released today. Let’s see how it is.

Venkat Sai(Rahul Ramakrishna) plans on getting married but things take dismal turns as he loses his job and his house gets robbed. He seeks help from his close friend Jani(Priyadarshi) to trace the culprit after he comes to know that his fiance’s necklace is missing.

The duo start tracking down the thief, but they have to overcome numerous challenges in the process. Will they emerge successful and catch the thief? What are the challenges that they face? The answers to these questions form the remaining story of the film.

Sadly, this film has very few things going it’s way. One of them would be the opening sequences, showcasing Sai’s lifestyle and his friendship with Jani.

Rahul Ramakrishna and Priyadarshi come up with very natural performances. They try their best to breathe life to this poorly-written dark comedy. Their dialogue delivery and diction may entertain a section of the audience.

Background score is okay in parts. One song is good to hear and it was showcased well on the screen.

This film lacks a proper story and adding to that, the offbeat screenplay will start irritating the audience even before the halfway mark. Most of the scenes look repetitive and they are further messed up with a bland narrative.

One might expect the film to make some sort of sense post-interval, but what follows is a tedious tale, which goes on and on and on. The sub plots in the second half are pointless and irritating.

To say the least, there is very little connection between the actual storyline and what we actually see on the screen.

The director, Prashant Kumar picked a decent story but the film needed better treatment to make it look more appealing. Proper care should have been taken towards the screenplay.

The music director, Vivek Sagar came up with a good background score. He adds more intensity to a couple of scenes in first half.

Camera works are neat and the production values a adequate. Art direction department did a fairly decent job as well.

On the whole, Mithai is a poorly executed dark comedy that has very few things going its way. The film starts off well but loses track after 15 minutes or so. It is a steep fall from there on and even natural performances from Rahul Ramakrishna and Priyadarshi could not save the film making it a below par watch this weekend.