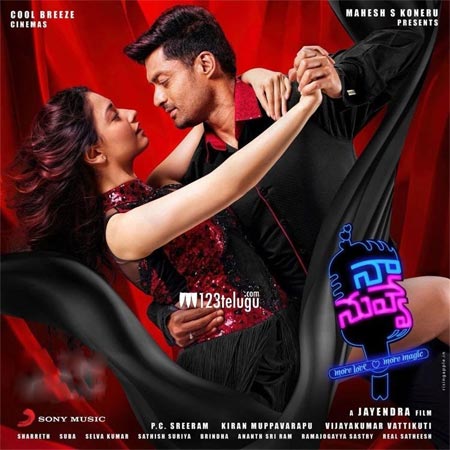 Nandamuri Kalyan Ram and Tammannaah’s upcoming romantic entertainer, Naa Nuvve audio launch event was held last night in Hyderabad. Music composed by Sharreth, the film’s complete audio album is out in stores. Let’s see how the songs turn out to be.

Analysis: The album starts with this trendy youthful number Hey, Hey ILU is sung by Tippu. Lyricist Ananta Sriram has penned some beautiful lyrics using contemporary words which will instantly click with young music lovers. This montage song will click even better on screen.

Analysis: Sung by Yazin Nizar and M.M Manasi, Nijama Mansaa is a romantic melody that starts on a lighter note but picks up within no time with an engaging tune. Lyrics by Ananta Sriram are catchy and perfect for the song’s mood. Fresh vocals of Yazin and Manasi only take the song to the next level.

Analysis: This is the third song in the album and it is sung by Tippu. The song has its lyrics penned by ace lyricist Ramajogayya Shastri. Looks like the song is canned on the roads of Hyderabad and it progresses by introducing famous places in the city. This travel song may appeal ever better on the screen.

Analysis: Penned by Ananta Sriram, Chiniki Chiniki is a romantic number which is sung by Karthik and Saptaparna. The soothing and pleasant tunes composed by Sharreth shine in the song. This indoor romantic song will click on the big screen under the captivating lens of top-notch technician PC Sreeram.

Analysis: Premika is the fifth song in the album and can be easily termed the best song in the album. Lyrics by Ananta Sriram and vocals by Sharreth gel well in the song and gives the music listeners a feel-good impact. Looks like the song comes at a crucial juncture and it adds a lot of depth to the proceedings.

Analysis: This ttitle track is sung by Priya Mali and Ramajogayya Shastri has penned the lyrics. Haunting music by Sharreth and impressive vocals by Priya Mali give a good impact.

Analysis: This female version of Hey, Hey ILU is sung by Rita. Lyrics and tune are same as the male version, but Rita’s voice makes the difference in a good way.

On the whole, Naa Nuvve’s album stands as the best in Kalyan Ram’s career. Premika, Naa Nuvve, Chiniki Chiniki and Nijama Mansaa have repeat value. All in all, Naa Nuvve’s songs will impress music lovers big-time.