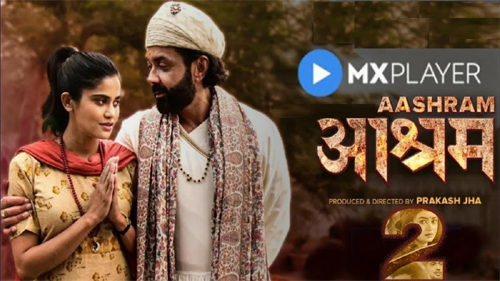 So, continuing the series of reviewing movies and shows, our today’s pick is the second season of the hit Hindi series Ashram starring Bobby Deol and directed by Prakash Jha. The series is available on MX Player and let’s see how it is.

The second season starts with Pammi(Aaditi Pohankar) who is a backward caste girl getting completely swept off by Kashipur Wale Baba(Bobby Deol). But the sad part is that she does not know that Baba is the one who has separated Pammi from her brother. Also, Baba becomes so famous that he is trying hard to bring the xc-CM back in power to run his empire. He is facing problems from the current CM and the rest of the story is as to how the fake Baba is exposed and put behind bars.

Unlike the first season, Bobby Deol gets more meat to showcase and he is just amazing. He is evil, wicked but yet has to show a straight face which the actor did superbly. Bobby Deol has taken a U-turn from his regular Bollywood roles and dons the fake Baba act amazingly.

Aaditi Pohankar gets a meaty role and she is amazing. Her role gets more space in season 2 and the way she finds out who the whole fake trade that baba does has been showcased well. Tridha Chowdary is glamorous in her role and shocks many in the second season with her bold acts.

The manner in which fake Baba’s operate has been showcased with minute detail and it is pretty good. BGM of the series is amazing and camerawork needs a special mention. The production values of the show are on another level as the Aashram is huge and bring a solid effect to the series.

The tension and suspense factor which is the biggest highlight is missing in the second season. Once the fake Baba is exposed to the main characters, the show becomes quite predictable. There was absolutely no need to narrate the story at such a length as the pace is also very slow.

Too many details of how the Baba enjoys his physical relationships have been glorified to no extent. The climax is also stretched for no reason and could have been ended in a simple manner.

On the whole, season two of Bobby Doel’s Aashram does not live up to the hype that season one created. Though the narration is decent and performances are superb, the predictable proceedings and slow pace play a spoilsport. Watch it with low expectations just to know how the fake Baba is put into his place.

Click here to Read the Review of Aashram -Season 1