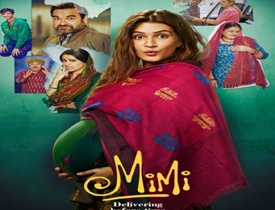 Continuing the trend of reviewing low-budget films on OTT, today’s pick Mimi starring Kriti Sanon. The film is now streaming on Netflix and let’s see how it is.

Mimi(Kriti Sanon) is a small-town girl whose only dream is to become an actress. Bhanu(Pankaj Tripathi) is a cab driver who lures Mimi to become the surrogate mother of a US couple. As the money is big, Mimi accepts the offer and undergoes surrogacy. The twist in the tale arises when the foreign couple refuses to own the baby. What will Mimi do now? How will she face her family and society? What steps does she take in life? That forms the story.

Kriti Sanon is known to do glamor roles but in this film, she makes a U-Turn and gives a fabulous performance. The character of Mimi gives her ample scope to perform and Kriti is first class in her character. The young actor showcases fabulous emotions as a young and helpless mother.

Pankaj Tripathi is known to do solid roles and is amazing as Bhanu. He evokes comedy, emotion and is a solid backbone of the film. Supriya Pathak and the other supporting cast does a wonderful job in the film.

The concept of surrogacy and the emotional drama that is executed through it is so good. The special aspect of the film is that it has ample comedy in the film. Both the fun and emotions are mixed so perfectly in the film.

Though the concept is quite good, you know where the film is heading. After a point in the last fifteen minutes, the story becomes quite predictable. The character of Pankaj Tripathi does so much in the film and some emotional angle to connect the story to his character would have given some more effect to the film. There are a few logical errors that go missing in the film.

AR Rahman scores music for this film and only one song is good in the entire film. The BGM could have been a lot effective but is only passable. The small town setup and the production design of the film are very good. Dialogues are impressive and so were the lyrics. Director Laxman Utekar brings a contemporary theme to life and adds perfect emotions which peak at the right interval. The length of the film is also perfect and it has fun and drama nicely balanced.

On the whole, Mimi is a well-made family drama with a very unique backdrop. Kriti Sanon leads from the front with her emotional performance and Pankaj Tripathi’s supporting act evokes good laughs. The film has strong content and is narrated in a very endearing manner making it a good watch this week.