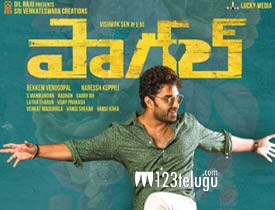 Vishwak Sen is back with his new film Paagal. The film is out on the big screens and let’s see whether it lives up to the hype or not.

Prem(Vishwak Sen) is very close to his mother(Bhumika). But sadly, at a very young age, he loses her to cancer. He always remembers his mom telling him that if you love someone sincerely they will also love you back. So taking this seriously, he keeps proposing to every girl he meets. But sadly, he gets rejected until he finally falls for Teera(Nivetha Pethuraj). What changes did Teera bring in Prem’s life and did he find true love or not forms the story of Paagal?

Vishwak Sen is the mainstay and carries the entire film on his shoulders. Vishwak is quite energetic in his role and looks cool when he delivers the over-the-top proposal scenes. Bhumika impresses in a brief cameo.

The first half of the film is quite funny and has some good moments. The comedy generated through the various proposals of Vishwak Sen and the track of Murali Sharma is good.

Nivetha Pethuraj is decent in her role and gets some good scenes to perform. Comedian Mahesh, Auto Ram Prasad do well in their scenes. The chemistry between Nivetha and Vishwak looks good.

Paagal has good moments in the first half and when you think, things will get exciting, the proceedings go for a toss. Nivetha Pethuraj and Vishwak’s love story has no proper emotion. The pain and drama in the love story is missing.

Also, the conflict point is quite dull in the second half and Murali Sharma’s track which is connected to the main story does not create much impact. Everything looks rushed and is just added to weave the story.

Nivetha Pethuraj and her way of approaching the love story is weak. Her character has no clarity and the way the director narrates her track looks forced and has no proper depth. The father-daughter angle should have been elevated a bit more.

The music of the film is pretty good but the BGM was just about okay. The production values are good as Vizag and its surrounding areas are showcased well. Dialogues and screenplay were good in the first half but it was ordinary in the second.

Coming to the director Mahesh, he has done a half-baked job with the film. By terming hero as Paagal, he has written good scenes and comedy in the first half. But when it comes to the key love story, he rushes up things and narrates the love story with a confusing characterization of the heroine.

On the whole, Paagal is a romantic drama with a decent first half. The comedy keeps the audience entertained and Vishwak Sen does well. But the film falls flat during the second half as the love story is weak, routine, and lacks the needed emotion making Paagal a half-baked love story.