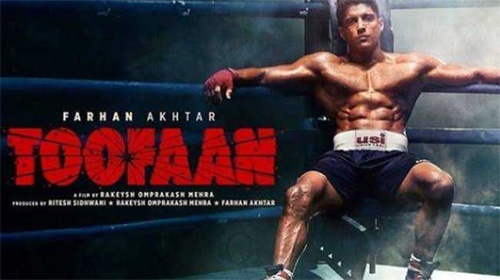 Toofan is a Hindi film starring Farhan Akhtar and will release this 16th. On this occasion, we caught up with the film’s main lead, Farhan Akhtar for a detailed interview. Here is the transcript.

What made you accept another sports drama in Toofan after Bhaag Milkha Bhaag?

I had a splendid association with Rakeshji for Bhaag Milkha Bhaag. The moment he called me and said I have one more sports drama, I was super excited. The moment I heard the role of Aziz Ali, the boxer, I okayed the film right away.

Tell us more about your role Ajju Bhai in Toofan?

Ajju Bhai aka Aziz Ali is one of the most famous Tapori’s in Dongri, the slum area in Mumbai. Everyone fears him and he gets into boxing with a freak incident and this changes his life. More than the physical aspect, the emotional turnaround attracted me more to the film.

Working with the likes of Rakesh Om Prakash Mehra?

Rakeshji’s films have a strong emotion. All his characters have a rooted back story and the same is the case with my role in Toofa as well. The manner in which Rakeshji has etched my role gave me a solid scope to go all out. Now that we have worked on two films, he knows my strengths and pens stories according to them.

What was more challenging, the physical transformation or the mental instinct to play the role?

Until now, I have taken all my roles seriously. I do not give much importance to physical transformation as it can be achieved with a lot of training. But getting it into the mind of a character is always difficult and the same happened to me with Toofan as well.

How did you prepare for the film?

Getting into shape was tough. It took over six months to get myself ready for this role. More difficult was to get the Tapori lingo correct as my character is a typical Mumbai local boy from the masses.

What’s so special about the film and what did you learn from it?

I learned to have a lot of patience in life. Also, the way I played Ajju Bhai, everyone will love the lingo and his struggle in life. The entire story and drama will arrest until the end.

When are you going to direct your next film?

I was in plans to direct a Hindi film but due to the pandemic, the dates have gone for a toss. I will surely make a film and am also working on the subject as of now.

Finally, when will you do a Telugu film?

As of now, I have no plans to do a film in Telugu. Frankly speaking, I have not received any offer so far and if I get a good role, I am ready for a Telugu film as Tollywood is making some great films off late.