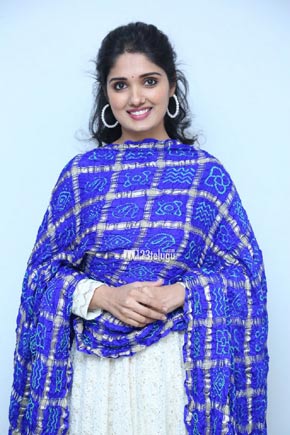 Pushpaka Vimanam is a film that has caught the attention of many. We caught up with the film’s heroine, Geeth Saini for a brief interview. Here is the transcript.

I am from Maharastra but have been living in Hyderabad for the last ten years. I can speak Telugu fluently and love dancing. Right from my childhood, I was fascinated by films and dance.

As I used to perform at various events, I used to get film offers a lot but at that time, I did not consider acting. One of my friends sent my profile for the audition of Pushpaka Vimanam. They liked my performance in the audition and roped me in for the film.

I play a girl called Meenakshi who is Anand Devarakonda’s wife. She is the one who elopes in the film. Why I elope, what’s the back story is the basic plot of the film.

Anand is the first-ever celebrity that I met in the industry. Anand is a very kind-hearted person and supported me a lot through the film. He has done a solid job and will impress you big time with his performance.

It is also because of his name, our film has gained a lot of attention. He has taken things to another level with his promotional strategies. He is very cool in real life and I would love to work with him one day.