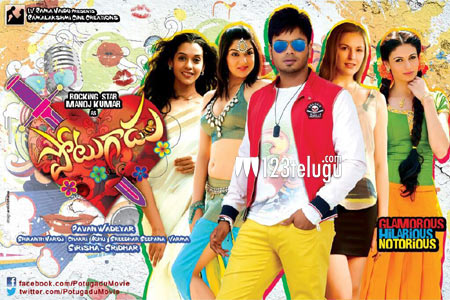 The audio album of Manchu Manoj Kumar’s ‘Potugadu’ was released yesterday at Annapurna 7 Acres. Pawan Wadeyar is the director and Rama Lakshmi Cine Creations banner has produced the flick. Manoj’s films usually have good audio albums, so let us check out this album and see if the songs are any good.

‘Pyar Mein Padipoya’ is a retro styled song that has been sung by Manoj and Indu Nagaraj. They have a done a good job with the vocals. This song has very addictive music and Achu has cleverly fused Indian as well as western instruments into the sound track. Bhasha Sri’s lyrics are decent. To sum it up, this is a fun and addictive track.

‘Devatha’ is a melodious solo number. Karthik has taken care of the vocals for this song and he has done a good job. Ramajogayya Sastry’s lyrics are poetic. Achu’s music is quite melodious and he has given the song a very romantic feel. The sound is refreshingly different and this is undoubtedly the best song of the album.

Tamil star Simbu lent his voice for this peppy solo number and he has infused a good deal of energy into this song. Bujji Pilla’s lyrics are just about ok but the music is peppy and apt for the mood of the song. Achu has used the synthesizer to good effect. Thumbs Up for this number.

‘Super Figure’ is a mass number that is aimed at the front benchers. Geetha Madhuri and Hema Chandra have taken care of the vocals and they have done a decent job. Manoj has penned the lyrics of this song and they have a very rustic flavour. Though the song has good pace, music is strictly ok.

‘Bindaas’ is another mass number from this album.Tippu has taken care of the vocals. Ramajogayya Sastry has penned the lyrics for this mass song. The song describes the traits of the hero and it might be used as the introduction number for Manoj in the film. Music is rustic and just about ok.

Achu has come up with some entertaining tunes for Manoj’s ‘Potugadu’. His music is refreshingly different and he has the potential to do some really good work. Peppy numbers and youthful tracks seem to fall into Achu’s comfort zone. But he is just about ok when it comes to mass tunes. The best songs from the album are ‘Devatha’, ‘Pyar Mein Padipoya’ and ‘Bujji Pilla’, in that order.