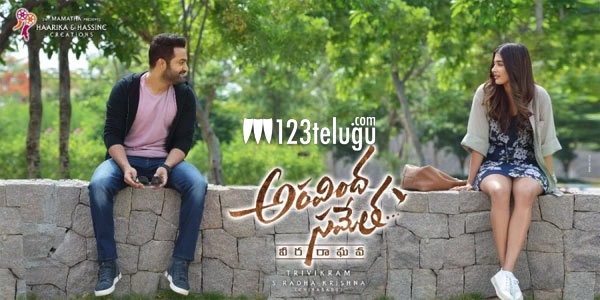 The complete audio of Aravinda Sametha is finally out in the open. Composed by the talented Thaman, let’s now see how this album turns out to be.

Analysis: The album starts off with a serious number Yeda Poyinado. The theme of the song showcases a lot of pain and Thaman makes sure that his orchestration gives a haunting feel to the number. Kailash Kher and Nikita Srivalli’s singing are an added bonus and what clicks with the song is the emotional chorus which can give you goosebumps while watching this heartfelt song on screen.

Analysis: The second song is Anaganaganaga which is a simple yet fun romantic number where the hero talks about the heroine’s beauty and how she has impressed him. The song has a traditional touch to it and the mood has been kept light by Thaman. The song takes its own time to grow and once you listen to it multiple times, you will fall in love with it. The lyrics are poetic as the song has Trivikram’s mark written all over it.

Analysis:  The third song and the best one in the album is Peniviti. An emotional number which showcases the pain of the women in the Ralayaseema region. The soulful song is all about the tensions and problems that the wives go through when their husbands are away. What clicks with the song is the tune. Though its sound familiar, the rhythmic nature hits you instantly. Ram Jogayya Sastry’s lyrics touch your heart as this Thaman composition will leave its mark for years to come.

Analysis:  The last song in the album is Reddy Ikkada Soodu which is the same old mass number which is specially added to the album just for the mass audience. The tune is ordinary and so are the lyrics. Daler Mehendi’s singing makes this otherwise routine number a bit interesting. This song might click only after you see NTR’s crazy dance moves on screen.

There was a lot of expectation from Thaman as he was teaming up with Trivikram for the first time. But looks like the ace composer has given importance to the emotions in the film rather than churning out commercial numbers. Peniviti and Anaganaganaga will be chartbusters and are our picks. Finally, the album of Aravinda Sametha is not your regular song and dance album and has been composed to gel with the narrative. It will grow on you slowly after watching the film on the big screen.