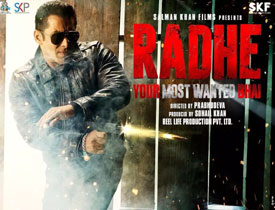 Eid and Salman Khan go hand in hand. Salman’s Radhe was supposed to release on Eid but on the big screens. As things have changed, the superstar has decided to release the film on OTT. The film is out on Zeeplaex and let’s see how it is.

The city of Mumbai is getting worse with the drug culture taking over the youth. All this is handled by the dreaded Rana(Randeep Hooda). The cops are unable to nab him and the government brings in a suspended officer named Radhe(Salman Khan) to deal with the case. How does Radhe handle the crazy situation forms the rest of the story?

Radhe is a Salman Khan film from start to finish. The most-wanted Bhai does not disappoint his fans as he gives an all-around performance. Sallu Bhai dances, fights, shows his six-pack, and mouths all the mass dialogues in full flow.

But the main villain, Randeep Hooda is also no less. He gives a tough competition to Salman and in some scenes, he is better than Salman. He has a solid role and his action avatar is good. Megha Akash gets a neat role and she is nice.

Disha Patani provides the needed eye candy and looks good with Salman. Though her track with Salman often distracts the flow, it is just about okay. The fight sequences are good and the songs are also composed well.

Salman Khan has become this demi-god where the logic in his films has gone for a toss as he is making films only for his fans. In Radhe too, there are so many logics that are ignored. The film is all about nabbing the villain and even after getting so many chances, the villain is left off in a silly way just to stretch the story. This looks way too over the top.

The climax chopper fight looks over the top and funny. Also, the needed emotions that should be showcased in a film that has a drug backdrop are totally ignored in the film. The cop set up and Jackie Shroff being a chief cop behaving in a comical manner, makes Radhe look boring.

The length of the film is also unbearable as close to 15 minutes should have been chopped off to make it a better OTT viewing. So many characters are added just for the sake of it and they deviate the story.

As said earlier, the songs are good and have been shot in a lavish manner. Dialogues are massy and will be loved by Salman’s fans. Production values of the film are just about okay and so was the camera work. Not much money is spent on the aesthetics of the film as the production design is bad.

Coming to the director Prabhu Deva, he just concentrated on Salman Khan and his mass image. Barring showcasing Bhai in a special way, the rest of his narration goes for a toss as he makes the film boring in many areas.

On the whole, Radhe is a film made only for Salman Khan’s fans. If you see from that angle, Bhai does not disappoint as he is a complete package in the film. But for the regular audience, Radhe has so many issues as it defies logic, looks silly in many ways, and ends as a below-par watch this Eid. So, make up your mind before you watch the film.