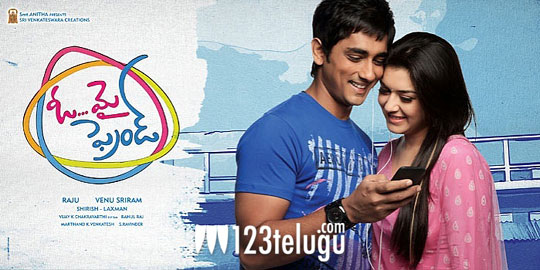 Siddharth and Dil Raju have teamed  up again to recreate the magic of ‘Bommarillu’. The movie is ‘Oh my Friend’ and Shruthi Haasan is the heroine opposite Siddharth. Navadeep and Hansika play key roles. The audio launch took place at Shilpa Kala Vedhika recently. Music has been scored by noted Malayalam director Rahul Raj. The album has seven songs in all. Let us see how the album fares.

This is a breezy and fast paced solo number that absolutely rocks. The song is rendered beautifully with a lot of life by Karthik. Rahul Raj’s music feels fresh and youthful and the music complements the mood of the song superbly.

A very good opening track for the movie. Lyrics by Krishna Chaitanya are pretty decent and do the job.

This is a short romantic bit song that has some good music and nice lyrics from Sirivennela Seetharama Sastry. This will most likely be used as a filler in the romantic scenes between the lead pair.

Siddharth and Shruti Haasan have sung this song and they did a pretty decent job. This song reminds us of the ‘We have a Romeo’ song from Bommarillu. The song is all about the search for long lost crushes from student days.

Lyrics by Krishna Chaitanya are pretty decent. This song will look good on screen when the scenarios which are described in the lyrics can be seen visually. Music is ok.

This is another superb track from the album. The song will blow you away with some superb performances in all the departments. The vocals are

taken care of by Ranjith, Sangeetha Prabhu and Sarah Straub. They do a marvelous job and lend a beautiful romantic feel to the number. Seetharama Sastry’s lyrics are excellent as always. Special mention must be made of Rahul Raj’s music. It is a lovely fusion of melody and modern beats. This song will easily find a place in your iPod’s ‘all time favourites’ folder.

This is a youthful song that is usually picturized on a group of friends who go on a roadtrip or a journey of sorts. The song has a fast pace and the singers do a pretty decent job. Krishna Chaitanya’s lyrics are fine and

the music is routine synthesizer stuff. Nothing spectacular but pretty decent.

lady friend. Seetharama Sastry’s lyrics are powerful and provide singer Ranjith with the right ammunition to deliver a solid performance. Music is soulful and is in keeping with the mood of the song. This song will probably come at a very critical juncture in the movie.

Siddharth dons the hat of a singer once again for this song. The music is dominated by the electronic guitar and is complimented by percussion instruments. This song will be picturized most likely at

a college rock fest or at a music competition final. Siddharth does a good job and the song is pretty decent. Krishna Chaitanya’s lyrics are nothing to write home about.

Verdict: The album of ‘Oh my Friend’ feels fresh and youthful. There are some terrific tracks in the album. Malayalam music director Rahul Raj makes an impressive Telugu debut with this movie. For me, ‘Alochana Vasthene’, ‘Oh my friend’ and ‘Nenu Thaanani’ are the top picks. Looks like Siddharth and Dil Raju have another musical winner on their hands.