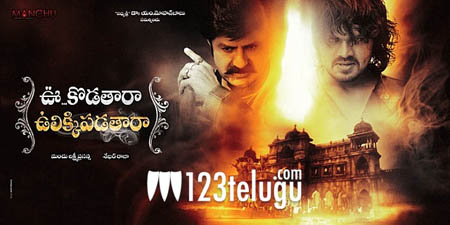 ‘Uu Kodathara Ulikki Padathara’ looks like it will live upto its title. The movie has been throwing up pleasant surprises over the last few weeks. From the grand sets to the impressive first teaser. The film’s audio launch was celebrated yesterday in Shilpa Kala Vedika and Bobo Sashi has scored the music. Nandamuri Balakrishna and Manchu Manoj will be seen as the lead actors in this movie which has been produced by Lakshmi Manchu. The audio album has 4 songs and an instrumental track. Let us see how the audio album is.

Vidyasagar scored the music for this track and this song will be used as a background number for Balakrishna’s character. The song is wonderfully melodious with some superb vocals from Karthik and Anveshaa. Ramu’s lyrics are excellent and it is nice to see such good prose in Telugu songs. Expect colourful picturization and some great visuals. Vidya Sagar’s music has a heavy influence of Indian instruments and it is very pleasant to listen to.

Bobo Sashi is in his elements here. The number Abbabba Abbabba has terrific new age music and it is a highly addictive number. The musical track is dominated by beats from the synthesizer and the Octapad. Vocals are good but Ramu’s lyrics merely act as fillers. A rocking musical track is the soul of this number and with good visuals, Abbabba Abbabba will become immensely popular.

Hai Re Hai is a spirited number that will perhaps be shot on large group of friends. The song has decent vocals and Ramu’s lyrics are just about ok. Bobo Sashi’s music complements the energy in the song. Though it is decent, the song pales slightly when compared to the other superb numbers from the album.

Without a doubt, this is the highlight number from the album and it is one of the most enjoyable tracks I have listened to in recent times. Haricharan and Prasanthini render the song well and Ramu’s lyrics are very good. Bobo Sashi’s music is terrific once again and his music gives the song a very youthful feel. The song has good visuals too as can be seen from the trailers and that makes this a sure shot winner.

This is a song with some horror overtones and the lyrics are highly ‘interesting’. It remains to be seen how this song will be picturized but expect a good dose of visual effects. The vocals have been rendered with good energy and Bobo Sashi’s music is perfect for the mood of the song. Rather than a standalone audio track, this number will be effective when coupled with visuals.

True to his reputation as a fearless artiste, Manoj is trying out something new with every movie of his. With UKUP, he is coming with an unusually named flick that has unconventional stills. The audio album has unexpectedly good music and Bobo Sashi delivers some outstanding numbers. ‘Abbabba Abbabba’ and ‘Adhi ani Idhi Ani’ are terrific new age tracks that will be a big hit with students and dance enthusiasts. Vidayasagar scored the music for ‘Anuragame Haratulaye’, which is another melodious number. All in all, UKUP’s music has caught my attention and I am now looking forward to the film’s release.