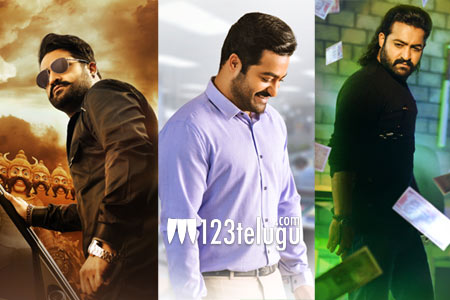 The complete audio of NTR’s Jai Lava Kusa is finally out today. Composed by the talented Devi Sri Prasad, let’s now see how this album turns out to be.

Analysis: The album kicks off with a hard hitting number called Raavana which hits you instantly. Probably, one of the best songs in the film, DSP gives this song a hard-rock kind of a feel. The best part of the song is the catchy chorus line ‘Asura Asura’ which has been interlaced quite interestingly. Chandra Bose’s lyrics nicely reveal the negative touch in NTR’s character which will be showcased in this superb montage number. This song will undoubtedly be a rage and top the charts all over.

Analysis: The second song on the album is Tring Tring which is a typical DSP style western based peppy number. There is nothing great to talk about the tune but the song is nicely sung by Jaspreet Jazz which makes it quite stylish. NTR’s trendy dance moves will surely help this number. The lyrics are trendy and this song will click only when you listen to it multiple times.

Analysis: Moving on, the third song in the album is Ne Kalllona which is yet another hit number from DSP. The moment you listen to the song, it hits you right away. An interesting aspect of the song is how it gets dark with NTR’s negative character showcasing love in his in a harsh way. Hema Chandra’s singing is what ticks with the song. He sings the romantic phrases quite soothingly where as changes his tone during the later part and makes this number very good to hear.

Analysis: The fourth and last song on the album is Dochesta, a light hearted number which is full of life. DSP keeps the composition quite lovely and gives NTR fans a reason to cheer. Right from the singing to the lyrics, everything works for this song which will be an even bigger hit once you see NTR’s quirky character on screen.

On the whole, Jai Lava Kusa’s audio is a decent outing for Devi Sri Prasad. Even though he does not give super hit songs that are expected for NTR’s range, he nicely makes each song different and composes them according to the character and situation. Raavana and Ne Kallalona are our picks and will be even bigger hits once the film releases. Finally, as for every DSP album, JLK’s audio too, will slowly grow on you with time.