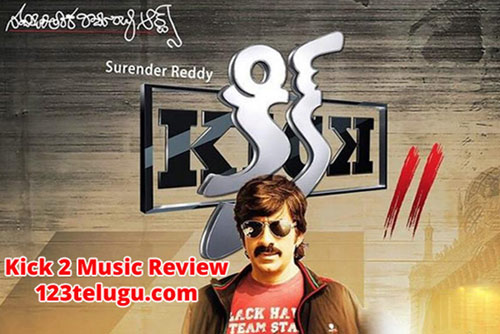 Kick 2 is one of the most awaited films in the recent past. The magical combination of Thaman, Surender Reddy and Ravi Teja are back again with yet another interesting album. Let’s check out how the complete album turns out to be.

Analysis:- The album starts off with an hilarious number Mummy. This is a typical Ravi Teja mass masala number which showcases his character in the film. The hook up line ‘Mummy’ has been used quite nicely by Thaman. Lyrics are funny and the way this song is sung with such a careless attitude is wonderful. A instant hit which will be liked by one and all.

Analysis:- The second song in the album is ‘Nuvve Nuvve’ which is best of the lot. A romantic sufi number which is sung superbly. Thaman’s voice suits the number perfectly and the soothing feel will embrace you completely. Lyrics are serene and have that mesmerizing effect on you. This number will be liked more once you watch its visuals.

Analysis:- Moving on, the third song in an interesting number Jenda Pai Kapiraju. Sung effortlessly by Dhivya Kumar, this song has beautiful lyrics and the orchestration is quite serene. The song is very Indian and is something new which has come out from Thaman in the recent past. A perfect montage number which will hit you more when you listen to it multiple times.

Analysis:- The fourth song is the album is Mastani Mastani. A typical Thaman number which has all his trademark beats and tune. Lyrics are catchy and go with the mood of the film. The best part of the song is the quirky singing by Manasi. A simple and fun song which will go well with the audience.

Analysis:- The album moves ahead with an chorus number Temple song. This number is a heavy duty emotional song which depicts the pain and feel of the film. Even though this song reminds you of many A R Rahman compositions, the way Thaman has given his touch with a heavy base is very good.

Analysis:- The sixth song in the album is the title song Kick. A typical mass number which hits you instantly. There is nothing new about the music arrangement but the fun tune has been composed well. Lyrics are quirky and this number will definitely go well with the masses.

One can easily say that Kick 2 does not have any chart topping tracks that Kick had. As expected, Thaman does not experiment much and gives a pretty safe and decent album. This album has songs in every genre and Thaman has nicely balanced the emotions with entertaining tunes. Kick, Nuvve Nuvve, Temple Song and Mummy are our picks and will work with the mood of the film perfectly.