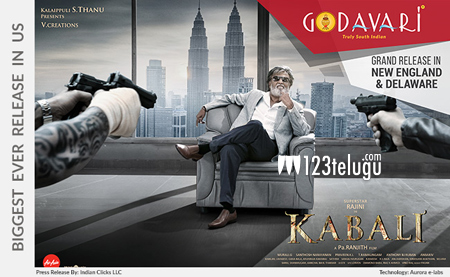 The rapidly expanding South Indian cuisine restaurant chain in the US, Godavari is all set to promote the biggest South Indian film, “Kabali”.

The mega movie, starring none other than the Super Star himself, Rajnikanth can now be thoroughly enjoyed by viewing it across 15 Screens in the New England region and the state of Delaware, making it the biggest Indian releases of the year.

Speaking on the association, TEAM Godavari said; “We are more than excited to be promoting our very own Indian movie, “Kabali” here in America. We are sure to witness tremendous success through this tie-up, as the movie and most importantly Rajnikanth has a huge craze among the large number of Indians living out here.”

Godavari is releasing Kabali in the States of Massachusetts, Connecticut, Rhode Island, New Hampshire, Maine and Delaware are all geared up to screen this most awaited Indian film.

Adding another record to its endless list, the blockbuster movie which is sure to be a super-duper hit, is the first Indian film to be released in the state of Maine. The premier shows will hit screens on the 21st of July at 11:45 AM in Tamil and Telugu.

Fans of the most celebrated actor in India have just got even luckier as authentic Indian food will be served at the Apple Cinemas in Boston. One can relish a wide array of mouth-watering Indian delicacies, whilst cheering aloud for their most favorite and stylish actor.

Godavari restaurant continues to increase its visibility across the country, as the restaurant will open in newer locations like Morrisville (NC) by this month end, followed by Hartford (CT), Framingham (MA), Cumberland (RI) and many more in the next month.

“Godavari Productions” would be its new venture into the film industry by supporting short films and encouraging young talent to showcase their creativity to the fullest through their upcoming project.

Get Ready to Say “Kabali Raa” with Godavari @ any of these Theaters in New England Region & Delaware!!!!