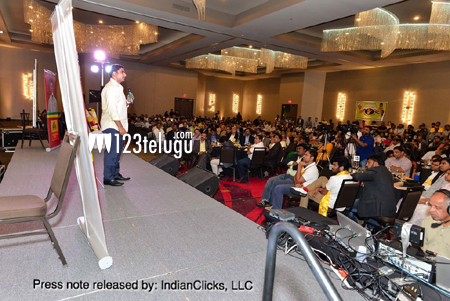 A overwhelming NRI TDP, Dallas wing organized a huge car rally making Dallas streets yellow, and brought Lokesh to the venue where over 1000 people assembled for the meeting on Sunday, 10 May 2015 at 7pm.

Dr. Navaneeta Krishna Gorrepati, a Past President of TANA and a Sr. Cardiologist in Dallas, made the opening remarks that the Govt of AP has a contributing role in their success by spending big amounts for each individual’s education taking his own example of the government’s cost towards the education of a doctor. It was not only their responsibility to give back to the Govt but also an opportunity to develop the village where they were born.

Mr. K C Chekuri & Lokesh Konidala introduced the NRI TDP office bearers from Dallas and explained the activities undertaken over the last 7-8 years. Subsequently, referring to the Smart Village program, Mr Raghavendra Prasad thanks Nara Lokesh for this opportunity and mentioned that NRIs were always seen as money packets by all the previous politicians, leaders and governments but for the first time, Govt of AP was seeking the intelligence and experience of NRIs in the development of the state. He reiterated that the Govt of AP asking involvement from NRIs and not just financial support was a very good sign and encouraged everyone to participate and help in the success of the initiative.

Mr. Sugan Jagarlamudi, who coordinated the adoption of villages from NRIs in the Dallas area, mentioned that they have appointed 20 ambassadors district wise (with 2-3 individuals for each district). These ambassadors promoted the initiative and succeeded in obtaining 356 donors for village adoption. Mr Sugan presented a detailed list of the donors and respective villages adopted district wise. He added that Prakasam district topped the list with maximum number of village adoptions followed by Chitoor district.

Presenting the finer details of the Smart Village Smart Ward programme, Nara Lokesh thanked the NRI community in Dallas area and appreciated their efforts in taking up promotion district wise. During the Q&A session, Nara Lokesh clarified on many queries and processes. To a question on how difficult or easy would it be for an NRI to participate, Mr. Lokesh said that Govt of AP is working on having a fibre optic connection to all villages by the end of the year. With internet connectivity in place, NRIs could interact with the village leaders and government officials using Skype. He also added that NRIs could appoint representatives to work and coordinate activities on their behalf. This entire process would be a recognized government activity performed under the office of the Collector and hence any issue could be brought to the notice of collector for help and resolution. He also mentioned that can be multiple people for the same village and there can be a donor / coordinator for specific task.. for example: a person who has interest or expertise in education or water mgt or sanitation can take up that responsibility for that for many villages.

A wing for NRIs
Responding to another question about help and support to the NRIs, Mr. Lokesh mentioned that the Govt the AP is seriously contemplating to start an independent body for NRT (Non Resident Telugus). All NRIs would be enrolled as members and this body would function under Govt of AP and would look after all issues of NRIs varying from simple support in arranging darshan at Tirupati to give assistance to issuing / renewing passport to many things. A detailed announcement would come in the next 50 days.