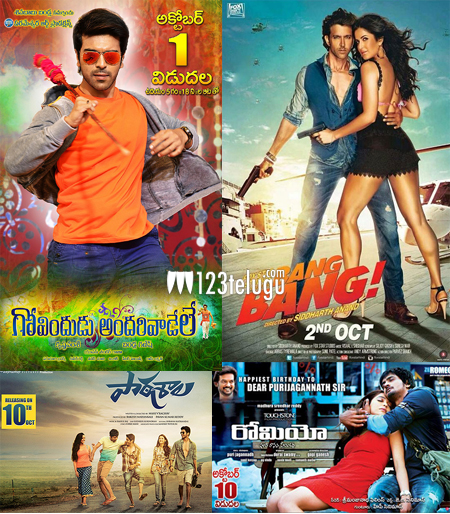 Dussehra, which is also known as Vijayadashmi, is a major Indian festival and we will see huge celebrations during this season for almost ten days. Dandiya, Bathukamma are the major attractions of this festival for Telugu people across the globe. This is a grand festival not only for general public, but is also a box office festival for Tollywood as many big films release during this season.

This year, we see four big releases in two weeks of this holiday season, out of which 3 are straight films and one is a dubbed movie. A couple of days before Dussehra on October 1st, Mega Power star Ram Charan, strikes with his most anticipated movie ‘Govindhudu Andharivadele’. The very next day we see the release of Telugu dubbing of Bollywood’s biggest release ‘Bang Bang’, which features Hrithik Roshan and Katrina Kaif in the lead roles. Then in the next week, we have the releases of ‘Pathshala’ and ‘Romeo’.

Of these 4 releases, which film would you prefer during this Dussehra season?