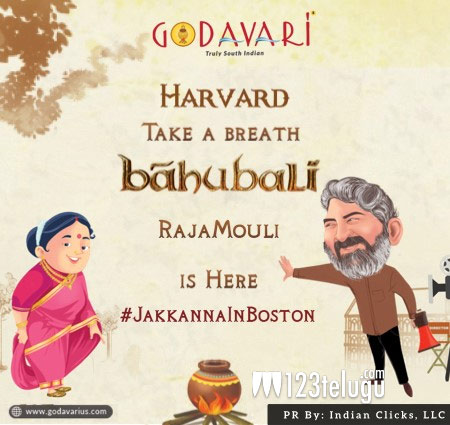 The fastest growing Indian restaurant chain on the planet now welcomes Shri S.S Rajamouli (The Pride of Indian Cinema) to its base town in Boston.

Mr. Rajamouli has been invited by the Harvard University to attend the India Conference 2019 which were previously attended by many famous personalities from India like Kamal Haasan, Sharukh Khan, Pawan Kalyan and many more.

Godavari takes pride in inviting the versatile director to Boston, the place where #Godavari started and is now growing throughout the world.

“It’s an immense pleasure inviting Padma Shri S.S Rajamouli who is on the Verge of International Stardom taking Indian cinema to the next level and making it global, to Boston the place where all it started for Godavari.

It was around the time of Baahubali first part release when we opened our first location in Boston and just like the way Baahubali had mammoth success in Indian cinematic history & created a place in the world of cinema, similarly we carved a niche for ourselves in the world of Indian cuisine.” says “Team Godavari”.

“He is an inspiration for our young team and we see his vision and hard work behind Baahubali. We always treat it as a case study. Today we are truly honored that Harvard invited him to address the students and young entrepreneurs like us.” adds “Team” Godavari.

Feel free to reach out to us franchise@godavarius.com if you want to work with us or make your dream of opening a restaurant come true anywhere on the planet.

We once again wish a Happy & Pleasant stay for S.S “Baahu”mouli a.k.a Jakkanna in Boston!!!

FROM BOSTON TO THE WORLD!!