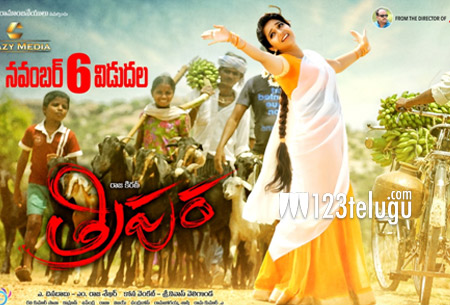 Anchor turned heroine, Colours Swathi who is known to choose selective unique roles, is playing the main lead in this film. After acquiring continuous hits with “Swamy Ra Ra” and “Karthekiya”, Swathi is aiming for hattrick with “Tripura”, now. A promising director Raj Kiran who created his own mark in the film industry with his debut film Anjali starrer “Geetanjali” is making this film with a core confidence with a versatile storyline which is a horror, thriller and comedy based lady oriented film as “Tripura”.

Hero Naveen Chandra who shot to fame with “Andala Rakshasi” is playing the prominent role in this film. Comedians Sapthagiri, Shakalaka Shankar, character artiste Rao Ramesh and others are also playing vital roles in the film. The comedy sequences with Sapthagiri, Shakalaka Shankar are hilarious, laughing riot and highlights of the film.
Script was written by ace writer Kona Venkat. A.China Babu and M.Rajasekhar are producing the film. Kamran is the music director. Upendra and Ravi Kumar Sana are handling editing and cinematography respectively.
Don’t miss the chance, hurry up to enjoy this weekend by watching “Tripura”, only for $10 per head.