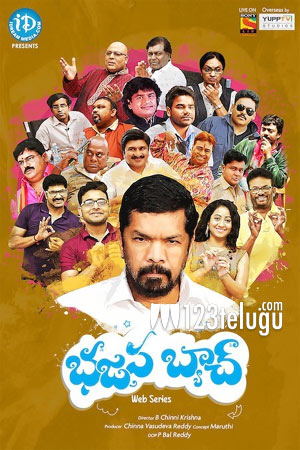 iDream is proud to bring you its latest Web Series ‘Bhajana Batch’ – The Laughter Riot streaming live on Sony Liv.

The series is directed by popular filmmaker Chinni Krishna who gave us films like Akshara, Veedu Theda, London Babulu and Brother of Bommali.

‘Bhajana Batch’ revolves around a bunch of con artists who are experts in distracting and tripping people to deceive them. Posani Krishna Murali known for his excellent comedy timing and punch dialogues plays a crucial role and never ceases to tickle the funny bones.

‘Bhajana Batch’ is streaming live in Sony Liv across India. To cater to the international audience, the provider of sensational and successful Telugu content, YuppTV, is streaming it.

The world of internet has been offering a plethora of entertainment and the digital space has created a new wave of fresh and fun filled range of viewer engagement products. It is here that iDream Media has become a forerunner conquering social media space and is crossing new horizons especially in digital entertainment.

This is iDream’s third venture and its previous project ‘Muddugare Yashoda’ featuring prominent actors like Pavitra Lokesh, Sameer, Sruthi Singampalli, Appaji Ambarish and others offered refreshing entertainment with its mix of traditional and modern views.

With many more web series under production, iDream is offering unique quality entertainment to its viewers. Having made a mark for itself in providing a wide menu of movies, interviews, iDream has now put its focus on creation of original content for OTT platforms.

With ‘Bhajana Batch’, iDream is looking to score success just like its previous projects and is already working towards offering many more entertaining series in future.