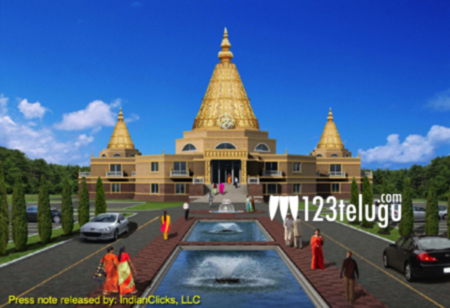 This event also marks the beginning of the first of the two phases of constructing a magnificent 40,000 sq ft temple complex which when completed will be the largest Shirdi Sai Temple in North America.

The first phase is expected to be complete by July 2016, and will include the main temple building, kitchen and dining areas and community rooms. A subsequent phase will add residential quarters for the temple priests and a 500 seat auditorium.

The ground breaking celebrations started in the morning around 8:30 am where participants were welcomed by soothing music of Nadaswaram and they joined a Palkhi procession of Sai Baba around the event site.

The decorations around the event site and the music created a divine atmosphere for everyone to soak in. The Palkhi procession was followed by an inauguration by the chief guest, Hon. Consul General of India, Dnyaneshwar Mulay who had travelled from New York to grace this occasion.

Other guests inclded are Prominent local community members like Vicky Vyshnav, Dr. Ammani, Ashwini Singhal, Mohan Nannapaneni. A short but an inspiring inaugural speech by the Consul General set the tone for the rest of the event.

Mr. Mulay extolled the virtuous life of Sai Baba who made no distinction among those who came to him but instead showered them with love, affection and peace. “His (Sai Baba’s) life has been inspirational for the simple values that he cherished of service, of peace, of equality, of harmony and for bringing all people together.” Mulay said. The Consul General also encouraged the Indian community to be ambassadors of Indian culture and heritage in America and congratulated the temple board and all the volunteers who have toiled over many years not just for their monetary contributions but more importantly their devotion, discipline and dedication, a hallmark of Indian community in America. He concluded with an invocation “Sarve Bhavantu Sukhinah ..” praying for happiness, health, well-being of everyone.

The rest of the day unfolded starting with a special Sankalpa, a pointed resolve, chanted by the priests to proceed with the temple construction plan along with the various blessings to accrue to individuals, families and everyone at large. The Sankalpa was followed by Maha Ganapathi pooja and Kalasha Sthapana amid chanting of sacred verses by the temple priests.

Then came the Samuhik (collective) Bhoo (earth)-Mahalakshmi –Sai Homam which was a pure spectacle to participate in. 108 homa kunds (fire pits) were neatly arranged in several rows in which hundreds of families participated in. A main homa kund was also set up by the priests. In many ways, this was a first time experience for most participants due to the sheer scale.

NESSP volunteers provided all the puja materials and assistance during the homam to the participant families. The procedures for performing the homa were completed with due religious formalities by propitiating various Hindu deities for benediction. Finally, the homam concluded with the “Poornahuti” or the complete oblation amid chanting of “Sai Nath Maharaj ki Jai” that rent the air. It was truly a divine experience.

Following the Homam, the Bhoomi puja was performed. Five spots were chosen, four of them marking the corners of where the main temple will be located and the fifth at the location where Baba’s marble statue will be seated. The ground was dug with reverence, foundation stone laid amid sacred chanting and religious formalities were fulfilled. What made the whole Bhoomi puja special was the opportunity for all to participate in the ground breaking activity.

This was done in the true spirit of “parivaar” or family, which has been a corner stone of NESSP’s philosophy since its inception. The participants lined up along the perimeter of the construction plan marked in the ground with bright orange paint. All the participants took turns to break the ground with shovels with great devotion and committing themselves to the temple construction project. The spirit of one family was all the more evident as the Bhoomi puja and the samuhik homam provided a great platform for the New England Sai community to come together.

Oblation in the form of arathi was offered to the presiding deity, Sai Baba, followed by a short vote of thanks by Mr. Mahender Singh of NESSP. Mahender Singh recalled the humble beginnings of NESSP with a small but a committed devotee base and how the organization has grown over the years due to an exceptional volunteer base that are ready to offer their time and resources any time any day. Mahender also reminded how the hard work of the volunteers has made the seed that was sown nine years ago grow into a tree in the form of Sai Temple and how these volunteers are leaders in their communities in their own right. Mahender also thanked the professional team that includes the architects, the engineers, the builders, and the legal team which have a depth of experience to see projects of this magnitude and specialty through and not to mention folks from the volunteer base that provided help with strategy and hosting webpages etc.

The financial help by long standing donors was also acknowledged and Mahender extended NESSP’s appeal for generous donations to continue. The vote of thanks was followed by Lunch Mahaprasad to all the attendees which numbered around 1600 on a picture perfect day.
Finally, in the Sai Satcharita, the book on life and teachings of Sai Baba, the author Sri. Dabholkar says regarding Sai Baba “The devotees do not know where You are, but You so skillfully pull the wires that they ultimately realize that You are at their back to help and support them.” It is nothing short of a miracle, that so much progress has been made in such a short time for the temple construction project which financially alone is estimated at 8 million dollars.

NESSP beckons everyone in the New England community to participate wholeheartedly in the temple construction project and be willing instruments for one such wire-pulling exercise.

Moments captured during the event: https://picasaweb.google.com/112137163156375580948/BhoomiPoojaGroundBreakingShankusthapanaCeremony