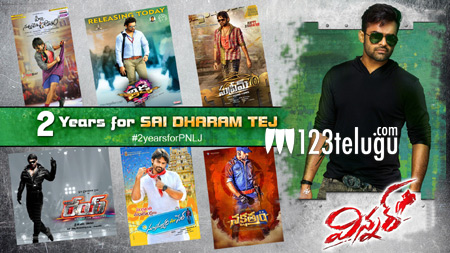 Sai Dharam Tej, the mega nephew is completing 2 years in Telugu industry by today. His first film Pilla nuvvu Leni Jeevitham was released on the same day of 14th November in 2014.

SDT is one of the hottest stars in current generation. In these 2 years, he acted in films such as PNLJ, Rey, Subramanyam for sale, Supreme and Thikka.

Right now, he is doing a special role in creative director Krishna Vamsi’s Nakshatram and his film in Gopichand Malineni direction titled Winner is getting ready for release in Feb 2017. Rakul Preet is heroine in this film.

SDT first film PNLJ collected about 10cr share at BO, where as his Supreme minted around 25crs which justifies his Supreme hero tag. This is a remarkable attainment for a young actor just in a span of 2 years.

SDT is willing to try different roles. His brief role as a powerful cop in Nakshatram is an example for that.

Sai Dharam Tej’s next is going to be a unique project under the direction of BVS Ravi. With his acting skills and box office potentiality, the young mega hero is becoming hot favourite of many producers anf directors. Let’s wish he will entertain us more in future.