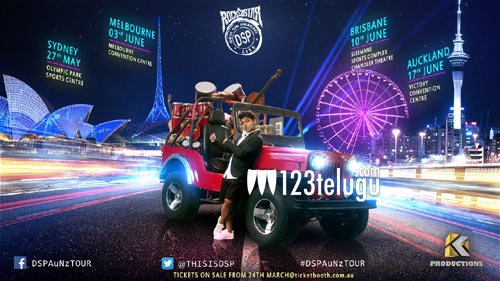 ‘Rockstar’ Devi Sri Prasad, who had recently announced that he’s going to perform live in concert in AUSTRALIA and NEW ZEALAND for the first time ever, has unveiled a truly innovative poster for his upcoming tour. The poster showcases Devi Sri Prasad, who’s about to set out on a musical journey, all geared up to enthrall his fans in four different cities across Australia and New Zealand organised by KK PRODUCTIONS.

Apart from Devi Sri Prasad, the concert will also feature a great lineup of musicians and singers from India who will be travelling with him to various cities. The music director has always looked forward to collaborate with talented artistes and musicians from various countries to entertain the audiences and just like what he did during his US tour, several promising musicians and artistes from Australia and New Zealand will be performing with DSP in this concert tour.

DSP’s Australia & New Zealand tour will kickoff from May 27 where he’ll perform in SYDNEY at OLYMPIC PARK SPORTS CENTRE, and then on June 3 in MELBOURNE at MELBOURNE CONVENTION CENTRE. Later, he’ll be performing on June 10 in BRISBANE, New Zealand at SLEEMANS SPORTS COMPLEX CHANDLER THEATRE and then DSP will be heading for the final concert on June 17 at VICTORY CONVENTION CENTRE in AUCKLAND, New Zealand.

The tickets for the concert will go on sale from March 24 at ticketbooth.com.au.

So get ready to grab your tickets and shake a leg with DSP..!!