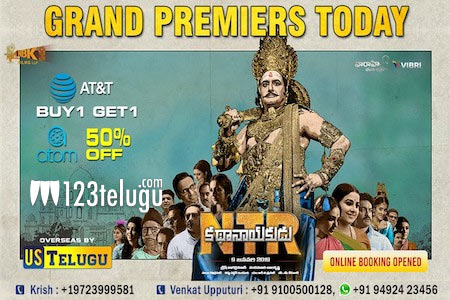 It’s been quite an anticipatory wait to see the life of the legendary NTR unravel on the big screens. Telugu cine buffs have been excited ever since the film was announced and with the film’s release finally taking place on January 9, there’s a great deal of pre-release hungama all over.

Fans in the US, especially, are feeling the proximity to Telugu cinema like never before courtesy the several promotional videos of Kathanayakudu. The latest is that fans in Detroit inaugurated a statue of NTR to mark the release of the film.

In fact, the immense pre-release buzz has contributed to the film’s premieres’ pre-sales crossing $300,000 way before release!

Kathanayakudu sees Balakrishna play the role of his legendary actor-politician father NTR. The film is directed by Krish Jagarlamudi, who collaborated with Balakrishna earlier for the acclaimed film Gautamiputra Satakarni which was also the actor’s 100th film.

Also starring Vidya Balan as actor NTR’s wife Basavatarakam and several other well-known actors playing key roles as several well-known personalities, the film is touted to be a big screen extravaganza made on a massive scale.

NTR Kathanayakudu is releasing in 200+ locations in US with 600+ premier shows.

We, at US Telugu, invite all of you to join us in watching the life of one of Telugu cinema’s legends, at the theatres nearest to you.

For any additional info/questions please reach us at: