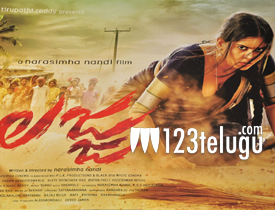 Talented director Narasimha Nandi, who made films like Kamala Tho Na Prayanam is back with his latest film Lajja. This hard hitting film has hit the screen today. Let’s see how it is.

Suseela(Madhumita) is a simple house wife who leads a miserable life because of her strict husband. One fine day, she encounters a young guy named Saleem (Varun) and falls in love with him.

As time passes by, she leaves her husband for good and runs away with Saleem and starts a new life. Twist in the tale arises when some untoward incident happens in Suseela’s life.

What is that incident ? and what happens to her after she decides to start a new life ? That forms the rest of the story.

The story of the film is female centric and showcases the thought process of a woman when she encounters huge problems. The way woman deal with some sensible issues have been elevated well. First half of the film has some decent moments with some hard hitting dialogues.

Mudhumita impresses big time as Suseela. The way she goes about her bold character and showcases subtle expressions is quite good. Varun played his supporting role quite well. The chemistry between the lead pair is a huge plus for the film.

One of the biggest drawbacks of the film is a hugely let down climax. The way things end after the proceedings start to get interesting disappoints everyone big time.

There are absolutely no commercial values in the film and regular audience will find it very hard to digest. Even though the film is quite contemporary, certain scenes have been showcased as if there are from the 50’s, and this is hugely confusing.

Camera work needs a special mention as the film is showcased in quite a natural way. Editing is pretty decent and so is the music and background score of the film. Coming to the director Narasimha Nandi, he needs to be credited for coming up with a hard hitting story like this. Even though he starts off the proceedings well, he completely side tracks the film after a point and makes the film meaningless.

Very few of us known that it is very hard to make films based on hit novels. Lajja is a take on the famous Chalam novel Maidanam. Even though, the makers have chosen the premise well, the way they have executed the film and let down the entire climax is hugely disappointing. Except for the decent performance by the lead pair, this film gets distracted after a point and ends up now where.