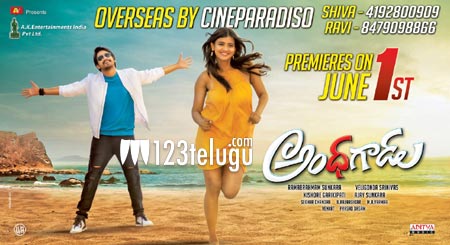 The leading South Indian film distribution company in USA,Cineparadiso, has acquired the overseas rights of ‘Anddhagadu’. After the hilarious comedy entertainer, ‘Eedo Rakam Aado Rakam’, Cineparadiso is very happy to be associated with this movie, produced by AK Entertainments banner and starring Raj Tarun. We are hopeful of another big hit with them.

The film also marks the coming together of Raj Tarun and Hebah Patel once again after two super hits and audiences are eager to watch their chemistry unfold on screen. Hebah Patel will sure turn up the heat.Writer Veligonda Srinivas has donned the director’s hat for the first time for this movie, which is touted as a complete entertainer.

The film has an interesting concept. Raj Tarun is playing a blind guy and it has created intrigue among the audience. The title ‘Andhhagadu’ is very apt. The comedy is going to be the USP of the movie and there will be enough action, sentiment and romance.

We are absolutely delighted to be distributing this movie. We thank A.K.Entertainments for giving us this opportunity to bring Anddhagadu to USA & Canada Market.

Anddhagadu is scheduled to release on June 2nd with premieres on June 1st in USA.

Andhhagadu will have a big release in USA in the BEST of theatres near you.

Stay tuned for more on Andhhagadu