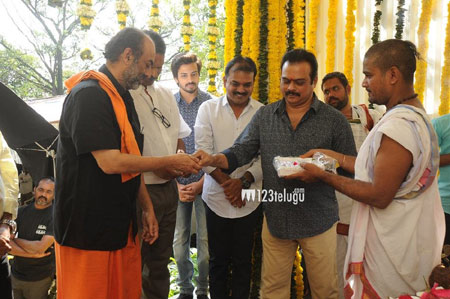 After Industry Hit ‘Srimanthudu’ another prestigious film in the combination of Superstar Mahesh and Super Director Koratala Siva is launched Today. DVV Danayya who delivered many Superhits is producing this big budgeted film under his DVV Entertainments LLP banner. Film is officially launched with a Pooja ceremony at on November 9th, 10.26 am at Ramanaidu Studios, Hyderabad. While Popular Producer M.Shyam Prasad Reddy clapped for Muhurtham shot, another popular Producer D.Suresh Babu switched on the camera. Regular shoot will start from February and film will release for Dussehra festival next year.

Director Koratala Siva says, ” After a super movie like ‘Srimanthudu’ with Superstar Mahesh, subject of this film is more powerful than ‘Srimanthudu’. This film will definitely raise the standards of Telugu Cinema. Mahesh is playing a completely different role compared to his earlier films.We are in the process of selecting the Heroine. Prominent actors will be seen in important roles. Producer DVV Danayya is making this film on a big scale with top technicians like Ravi K Chandran, Devi Sri Prasad.”

Producer DVV Danayya, ” I am very happy that my wish to do a sensational film with Superstar Mahesh is finally materialised with this film. I am also proud to work with Super successful Director Koratala Siva who is delivering continuous Superhits. This film will be made on a large scale which will increase the standards of Telugu Cinema. We are planning to release the film as Dussehra gift to fans and audience.”

Music Director Devi Sri Prasad, ” I am very happy to be associated with Director Koratala Siva for all his films. Music of my previous film, ‘Srimanthudu’ with Superstar Mahesh was a big hit. This film has even bigger story than ‘Srimanthudu’. Audio of this film will be bigger hit than ‘Srimanthudu’.”

Cinematographer Ravi K Chandran, ” Three years back I tweeted that Mahesh is my favourite Hero. Now I am excited to work with Mahesh. This film in the combination of Mahesh – Koratala Siva will be technically very rich. Even though I worked for many big films in the past, This film is very special for me as this time I am working for my Favourite Hero’s film and I will give my best for this film.”

This prestigious film which is yet to be titled is being made under DVV Entertainments LLP banner.