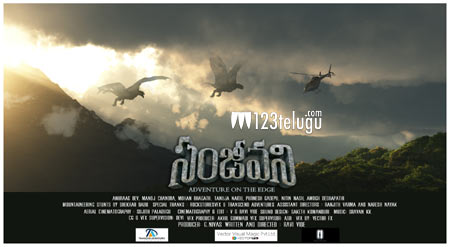 The next visual effects based movie to hit Tollywood screens is going to be the highly ambitious film Sanjeevani. The teaser of this adventurous thriller has already been released and it received extremely positive response. According to the makers, they made sure that the content of the movie is unique and appealing to all sections of audiences and the visuals match with Hollywood standards.

The movie was shot in Himalayas, Rohtang, Kerala, Nallamala and various other locations in South and North India. Most of the graphics work is in finishing stages and after completing the remaining post production work by August, the film is planned to be released in a good number of screens.

Anuraag Dev, Manoj Chandra and Tanuja Naidu are the lead actors. Ravi Vide is directing the film while Nivas is producing the film under Nivas creations banner. Visual Effects are done by VectorFX and Devi is Animation supervisor. Music is given by Sravan KK