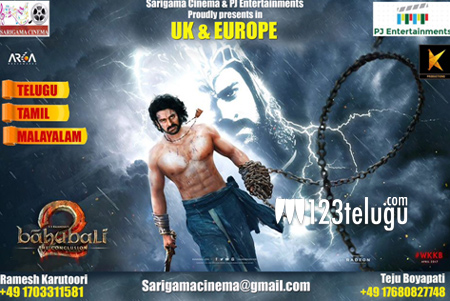 SARIGAMA CINEMA and PJ ENTERTAINMENTS proudly announce the distribution of the most prestigious and much awaited movie ‘Baahubali -The Conclusion’ in Europe & UK.
SS Rajamouli’s ‘Bahubali- The Conclusion’ which is the sequel to one of the biggest blockbusters ‘Bahubali-The Beginning’ in Indian film history till date celebrates the true spirit of Indian Cinema in a big way by delivering top class entertainment.
The Beginning achieved critical acclaim and record-breaking box-office collections, becoming the highest grossing film which has won many awards along with all our hearts.
The Magic of the director and the best visual effects have made millions of people around the globe proud of this movie.
Our sincere and heartfelt thanks to SN Rajarajan garu from K Productions and the producers Prasad Devineni garu and Shobu Yarlagadda garu for giving us the opportunity to be a part of this epic and fabulous project.
Watch the epic movie to explore the answer for the question of the year ‘Why Kattappa killed Baahubali?’ and to experience the journey to the kingdom of Mahishmati.