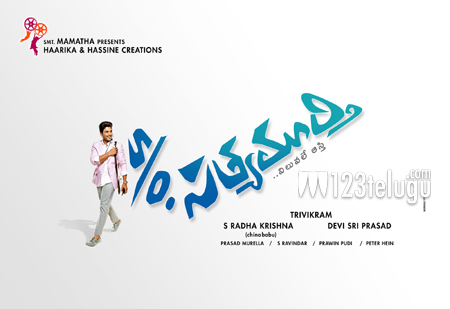 There’s always a first for everything legendary and the rest is history. There are many with ideas, but only some set a trend. When it comes to Trivikram, he clearly has been one trendsetter with his films, second, also with his promotional activities for most of his films, starting from Jalsa to S/O Satyamurthy today.Pawan Kalyan’s Jalsa was the first film in Telugu to have its first-look launched in the form of a poster at Prasadz, IMAX.

His next film Khaleja, too achieved a unique recognition of sorts by kick-starting the idea of a first look teaser and its release on social media platforms.Allu Arjun’s Julayi pushed the envelope a little ahead, by unveiling the first-look teaser minus the title, presence of its lead actor and also without the names of the chief technicians And now in two installments for S/O Satyamurthy with a one-of-a-kind pre-first Look and an extended pre-look, where crowds glimpsed the looks of the star-studded cast including stylish star Allu Arjun, Kannada Super Star Upendra (Re-Introducing in Tollywood), Samantha, Nitya Menon, Adah Sharma, Sneha, Rajendra Prasad, Ali and Brahmanandam.

Now, we take the opportunity to present the official logo of the film, you’re anticipating for months together, S/O Satyamurthy. Motion Poster of the Movie will be launched tomorrow Evening.