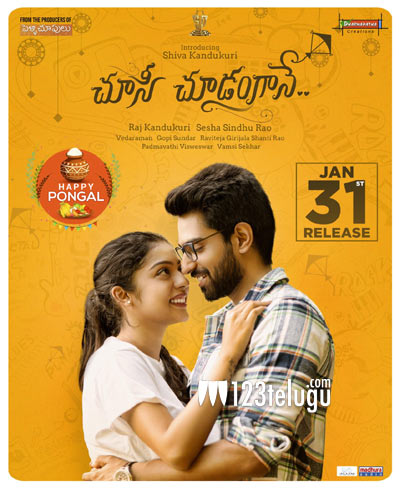 Raj Kandukuri, who produced blockbusters like Pelli Choopulu and Mental Madhilo is coming up with an another interesting rom com titled Choosi Choodangaane, starring Shiva Kandukuri and Varsha Bollamma. Shiva Kandukuri is making his debut with this film while Varsha Bollamma has already won many accolades for her roles in 96 and Bigil recently.

Sensational music director Gopi Sundar, who crooned music to movies like Ninnu Kori, Geetha Govindam, and Majili is composing music for this film. Music is already topping charts across all digital platforms and clocked more than 25 million plays. Sesha Sindhu, who worked as an assistant to Sukumar and Krish is making her debut with this film. The trailer that was released recently has caught the attention of urban audience.

Movie is hitting screens on Jan 31st with US premieres on 30th Jan. Nirvana Cinemas, which is known to bring content rich films to overseas audience is glad to associate with Raj Kandukuri Garu. We would like to thank Raj Kandukuri Garu and Madhura Sreedhar Garu for giving us this opportunity. Movie will be released in all major cities across US on 30th Jan. Stay tuned for more updates

In case if you have missed the trailer:

For trade enquiries, please reach out to 408-780-4655 or nirvanacinemas@gmail.com