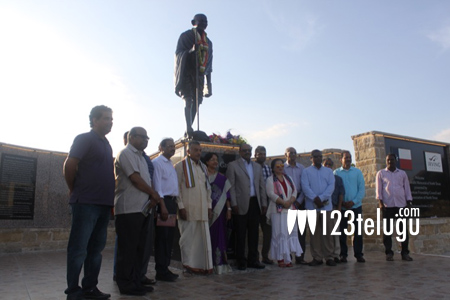 Mrs. & Dr. Yarlagadda paid rich floral tribute to Gandhiji and congratulated MGMNT Chairman Dr. Prasad Thotakura and his team for building the largest Gandhi Memorial in the USA. He said this memorial will be an inspiration to the next generation to know and follow Gandhi’s principles. Dr. Yarlagadda stated that Gandhi’s teachings, philosophy and principles are very relevant even more now in this current world. Dr. Yarlagadda recalled the remarks of US President Obama who said Gandhiji’s teachings motivated him to reach his current position while addressing the joint session of Indian parliament when he visited India. On this occasion, Dr. Prasad Thotakura released a book titled “Dakshinaafrica lo Mahatmodayam” written by Prof. Yarlagadda Lakshmi Prasad.

“We extend our Happy US Independence Day greetings to all Americans and deepest condolences to the families of more than 4,500 fallen heroes who lost their lives in 30 year-long American Revolution. Finally, US got independence from Britain on July 4th, 1776. Thomas Jefferson, the third President of the United States who played a very crucial role in freedom struggle, was the principle author of the declaration of Independence. It is very ironic to note that John Adams, the second President of the USA and Thomas Jefferson, the third President of the USA theonly two leaders who signed the declaration of Independence died on the same day, same year July 4th, 1826 while the whole nation was celebrating the 50th Anniversary of US Independence”. Dr. Prasad Thotakura, MGMNT Chairman said
Dr. Thotakura further stated that we felt it is very appropriate to place Mahatma Gandhi Memorial in Thomas Jefferson Park since there are many similarities between these two great people. For example – both are lawyers by profession; strived for human rights; proponents of democracy, fought against Britain Trade policies; boycotted British goods; campaigned against slavery; motivated publicand inspired all to march towards freedom; role models and icons of their nations; multi linguistic personalities, spoke many languages.

MGMNT Secretary Rao Kalvala congratulated Dr. Yarlagadda for receiving the coveted “Padma Bhushan” award from the Government of India recently and thanked him for visiting Mahatma Gandhi memorial again after a long gap of two years.

Shabnam Modgil, MGMNT Board of Director, expressed her joy in wishing happy Independence Day greetings to America from the Gandhi memorial. 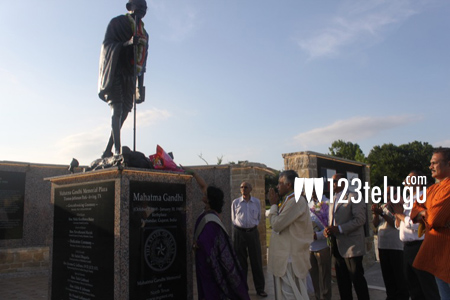 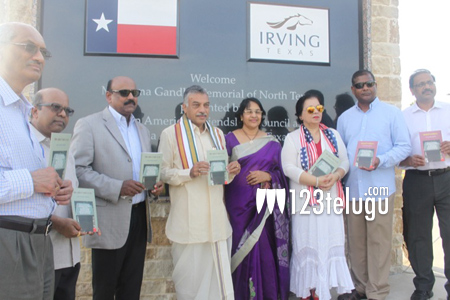