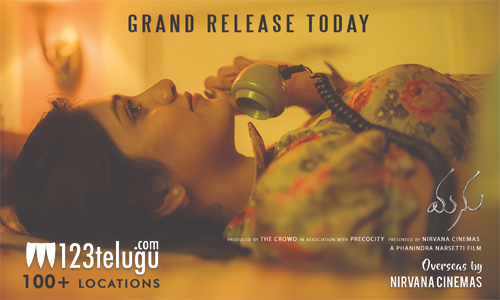 Manu, the first and fastest crowdfunded film in telugu cinema hits screens in US today. Phanindra Narsetti, the director of popular short films Madhuram and Backspace is making his debut with a feature film. Raja Goutham and Chandini are playing the lead roles. Manu is so different that it only has 45 minutes of dialogues in a 3-hour film without any songs.

Manu is a novel attempt in story telling and will break all standard norms in Telugu Cinema. If there are any rules about movie length, commercial elements, songs, Manu will be the biggest outlier as it doesn’t stick to any of these rules. Manu is a sincere attempt to raise the bar and push the boundaries of Telugu Cinema.

From using Shepard Tones, Wing Chun action choreography and many more techniques, each and every craft has been meticulously taken care of and will be loved by passionate movie lovers.

Manu will be having premieres in US today and is releasing on Sep 7 worldwide. Online ticketing is up, book your tickets now!

See you in theaters!