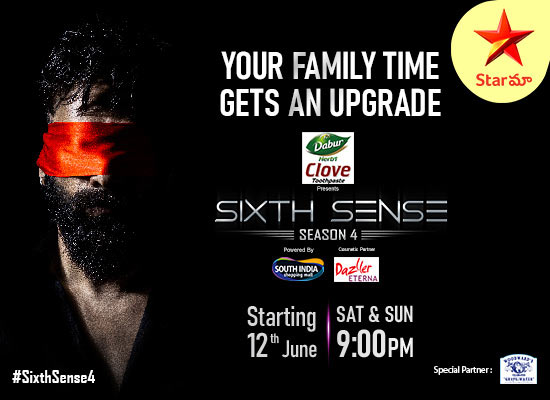 Star Maa’s most entertaining and exciting show, “Sixth Sense” is back with another brand new season. The show that packed a blend of distinct concepts for the past three seasons is now ready with a remarkable new notion.

With a mesmerizing new look, some of the most entertaining contestants, and with Omkar’s punches as the host, Sixth Sense season 4 is going to be bigger than ever.

The show’s first episode was planned with a grand cast including Punch master Aadhi, Glamorous Star Anchor Anasuya, four contestants of Bigg Boss 4 namely, Sohail, Mahaboob, Ariana, and Harika, along with the stylish presentation of Anchor Omkar. The show is also predicted to comprise some of the most unexpected contestants in its future episodes.

It is reported that Omkar, that had been presenting and directing the first three seasons of sixth sense in his own style is bringing in plenty of new concepts for the fourth season.

Omkar earned a reputation for introducing a suspense factor in the show by shaping the contestants’ feelings, leaving them clueless, and driving them towards a decision during the game. While following the same game plan that had made the show so popular among the audience, he plans to take it to the next level in the upcoming season.

Sixth Sense season 4 is scheduled to air its inaugural episodes this weekend on the 12th and 13th of June.

With many twists and turns planned, the show will continue to air every weekend on Saturdays and Sundays on Star Maa.

CLICK HERE!! for the Promo of the most Exciting Show #SixthSense4.