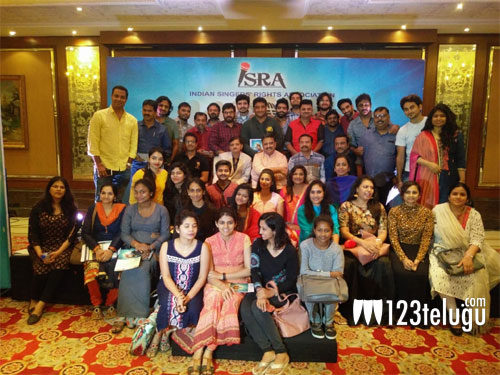 ISRA AS THE PERFORMERS (SINGERS) RIGHT SOCIETY OF INDIA

HOLDS ITS 1ST MEETING IN HYDERABAD

FOR BENEFIT OF ALL SINGERS OF  ANDHRA PRADESH & TELANGANA

SO THAT THEY CAN ALSO BENEFIT AND GET THEIR ROYALTY

Indian Singers’ Rights Association (ISRA) is a Non-profit making Company Limited by Guarantee under the Companies Act, 1956 and was born on 3rd May, 2013.

The Copyright Act 1957 (14 of 1957) was amended by the Copyright (Amendment) Act, 2012 (27 of 2012) on and w.e.f. 21st June, 2012. By virtue of the said amendments, Singers were accorded a Special Right to be known as the “Performer’s Right” on their Performances. Section 38, 38A, 38B, 39, &39A pertain to performances of the performers and their Rights. The Copyright Act provides that a Singer — as a Performer — shall be entitled for Royalties in case of making of the Performances for commercial use. In order to be able to collect such Royalties, Section 33 of the Act requires that any organization which wants to commence or carry-on the business of issuing or granting licenses in respect of the Singer’s performance has to get itself registered with the Central Government.

ISRA is now registered by the Central Government vide Registration No. P.R.S-01/2013 as a Performers’ Society (Copyright Society) under Section 33(3) of the Copyright Act 1957 and is permitted to commence and carry on the copyright business in Performers’ Rights of Singers and other activities ancillary thereto for a period of 5 years w.e.f.     14th June, 2013.

Playing/Using/Makingthe songs of ISRA’s Singer members for commercial use amounts to commercial exploitation of the Performer’s Performance and hence needs a Clearance from ISRA on payment of prescribed Royalty as per ISRA’s Tariffs.

By virtue of the provisions post the 2012 Amendments, it is now stipulated that anyone would require a Clearance from the Singers’ Copyright Society – I.S.R.A. and pay Royalty to play/use/utilize/perform film and non-film songs. Hence, the ISRA Clearance is in addition to any other License / Clearance that one would need to obtain, whether IPRS or PPL etc. This is a new Clearance which has come into being with the recent 2012 amendments.

ISRA today controls 95% of the Performer’s (Singer’s) Rights and all the who’s who singers are members including singers from North, South, East & West of the Country. It is also affiliated itself with foreign overseas societies.

Presently, the following are the Board of Advisors of ISRA :

Presently, the following are the Board of Directors of ISRA :

ISRA COMPLETED THE CYCLE OF ADMINISTRATION, COLLECTION, AND DISTRIBUTION OF SINGERS’ ROYALTY THIS YEAR.

Celebrating the 69th Republic Day of India, on 26th January, 2018, the Indian Singers Rights’ Association (ISRA) etched a Historic Occasion in its Life and that of Singers in India when it made the 1st ever Royalty Distribution of Rs. 51 lacs to Singers. ISRA distributed this Royalty for the period upto 31st March, 2017. This Royalty is being received by 730 Singers throughout the Country.

Says Sanjay Tandon, CEO “ ISRA now urges Singers of Kerelato also become member of ISRA so that even they can derive benefit of Singers Royalty.  This is just a beginning and so let’s all be together to ensure that our future is secured and we and after us our legal heirs get Royalties.  Justice has at last been received by Singers. Let’s strengthen this further.”