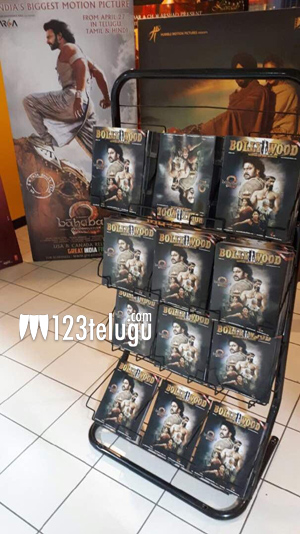 The Indian Magnum Opus Baahubali is setting new records everywhere and the same is true for the Canadian market. For the first time ever, the film is releasing in four languages across Canada at the same time. We have arranged Exclusive screening in Toronto at Albion woodside and York cinemas in 11 screens with more than 30 premiere shows.

Due to overwhelming demand and frenzy, that has never been seen before, movie is exclusively being screened for several corporate, group and individuals. We have also arranged a Imax screening in Edmonton/Alberta for the first time.

Movie Promotions in India are common. But for the first time, we are aggressively promoting an Indian film in Canadian market this aggressively. Baahubali is the First Indian movie advertised on greater Toronro Area GTA transit (Toronto, Brampton, Mississauga). It is also First Telugu movie to be publicized in the Canadian Bollywood magazine

Very rarely we can be part of history. Come and be a part of Indian movie history as it is being written in the modern age. Come and witness Indian pride and glory. Our Sincere thanks to GreatIndiaFilmsUSA, producers Shobu, Prasad, SS Rajamouli and all well-wishers.

Press Note Issued on Behalf of