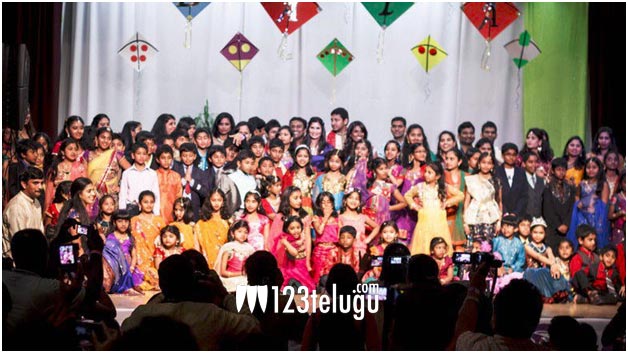 There was a huge support for this event from the businesses. Ramesh Konda thanked all the sponsors and recognized their names on the stage. Ravi Tax Services was the Grand Sponsor of the event. Other sponsors include Scopus Consulting Group, Channel Real Estate & Mortgage, Swagat Indian Cuisine, and Peacock Indian Cuisine. Virijallu, Desi 1170am, and Telugu Times were the media partners of the event.
The auditorium was superbly decorated and the main stage had multicolor backdrops and colorful kites that gave an ethnic and festival look of Sankranthi. The decorations, the stage backdrop coupled with the traditional outfits by the audience, participants & BATA volunteers reflected a festive atmosphere. 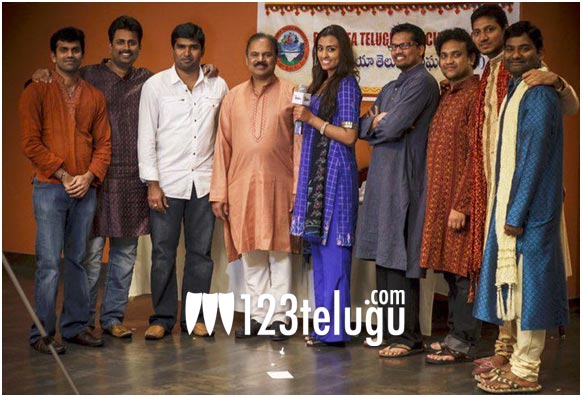 The program started with cooking competitions for adults (Super Chef) and kids(Little Chef). Kids got the ingredients from home and prepared a food item of their choice on the spot without any assistance from parents. Over 25 kids demonstrated their cooking prowess with a wide variety of items. The enthusiasm and excitement shown by the kids and the wide range of food they prepared from pasta, Quesadilla, aloo methi parata, macaroni cheese, chaat, sweets, sandwich to traditional payasam made it a very difficult decision for the judges.
Super Chef showcased the cooking talents of men & women; there were over 25 participants. Appetizers, main dish& desserts presented a sumptuous dinner buffet. With their experience in cooking, the Super Chef participants prepared variety of ‘yummy’ Sankranthi Special Ariselu, Bobbatlu, Kheer, pineapple sweet, pulao, biryani, beet-root laddu, and an 100 year old recipe vegetarian dish, etc. Judges had challenging time to select the best out of the best. Sumanth coordinated the cooking competitions and Jayaram Komati and Prasad Vasireddy led the judging team. 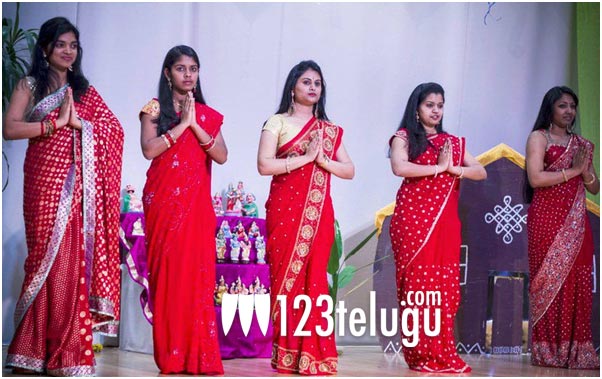 In parallel, Rangoli competitions were kicked-off by Vijaya Aasuri and Ramesh Konda. During this, both Vijaya and Ramesh welcomed the Rangoli participants. All of the participants came in traditional outfits to show their talent in making beautiful Rangoli designs within 45 minutes of time given to them.The finished Rangoli was a sight to see and brought nostalgic memories of colorful rangolis in the front yards of villages and towns back in India. Rangolicompetitions were coordinated by Karun Veligeti. 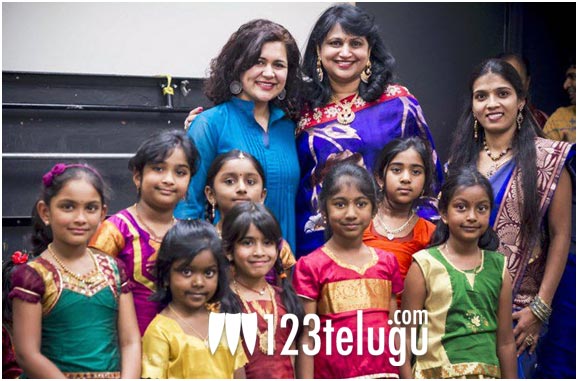 Simultaneously, there were also art and essay writing competitions for kids.The essay topic was “What is the quality you admire most in your parents”. Kids came up with simple yet really striking points in their essays. In the arts competitions, kids played with beautiful colors and themes and depicted the world as they see it. Art and Essay competitions were coordinated by Rahul Bulusu.
Along with the cooking, Rangoli, art and essay competitions, “Paatala Pallaki” a musical concert by the talented local singers ensued. This was another highlight at the event. Prasad Mangina led this segment. There were more than 25 singers (kids & adults). The songs were very popular numbers from Telugu movies, with a mix of old melodies and peppy new numbers. Audience cheered every song and was treated to great music by all the singers.Some of the songs presented were: Himagiri Sogasulu, Pranaya Raaga Vahini, Buchadamma Buchadu (Kids Group song), Lalitha Kalaraadhana Lo, Guvva Gorinka tho, Niluvaddamu Ninnepudalina, Ee Swasalo, Pilichina Raanantava, Nee Kallathoti Naa Kallaloki & Jagadananda Kaaraka.At the end of the “Paatala Pallaki” program, Prasad Mangina introduced all the singers. Vijaya Aasuri (BATA advisor) thanked all the singers for their participation and making the program a grand success. 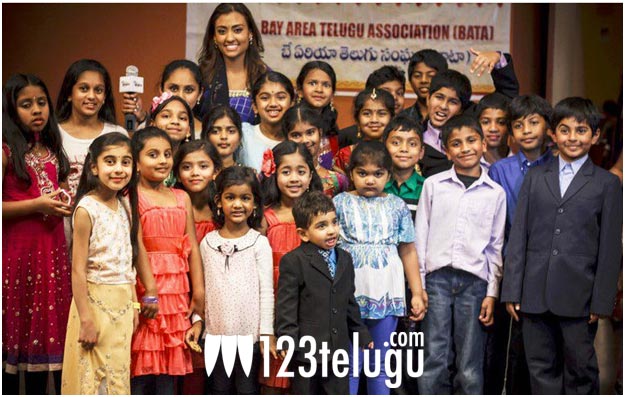 With competitions one hand and musical program on the other hand, the entire auditorium was filled with vibrant colors, festive atmosphere with spirit of Sankranthi. 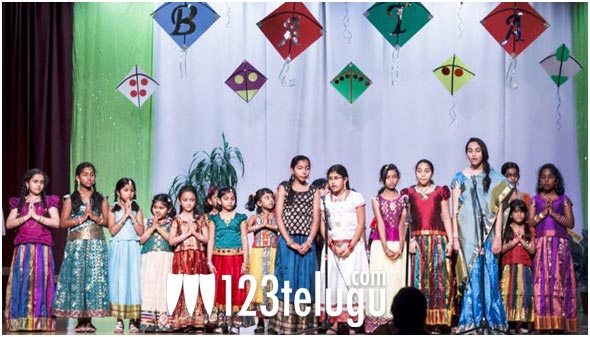 The main cultural program started around 5:30pm. Vijaya Aasuri (BATA Advisor and Cultural Secretary) officially kicked off the evening cultural program by inviting all the kids for “BhogiPallu” in front of the bommalakoluvu. The congregation of 100 kids & elders with traditional devotional songs by grandparents made it seem like a big family gathering – “VasudhaikaKutumba”. The grandparents and parents gave the blessings to the kids on the occasion of Sankranthi. 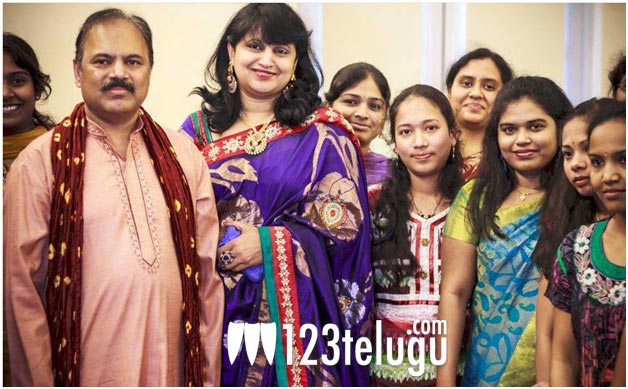 After the “BhogiPallu”, the evening culturalprogram started with prayer song by the students of Gamakam Carnatic Music School.Followed by this, BATA committee members felicitated the “Guest of Honor” for the evening Swami Prasannatmananda of Vedanta Society of Berkeley on the occasion of 150th Birth Anniversary of Sri Vivekananda Swamy. In his keynote speech, Swami Prasannatmananda shared the teachings and vision of Vivekananda Swamy with the guests. The words of wisdom provided by Swamiji were invaluable and precious.A spectacular classical dance ballet followed thereafter performed by the students from Madhuri Kishore Kuchipudi Dance School.
Next was Desi-Pardesi, a unique dance segment showcasing contrasting dance variations of a telugu song and its corresponding western counterpart. The dances, performed by over 50 kids and adults from across the bay area, were received with thunderous applause. Costumes for this segment deserve special mention. 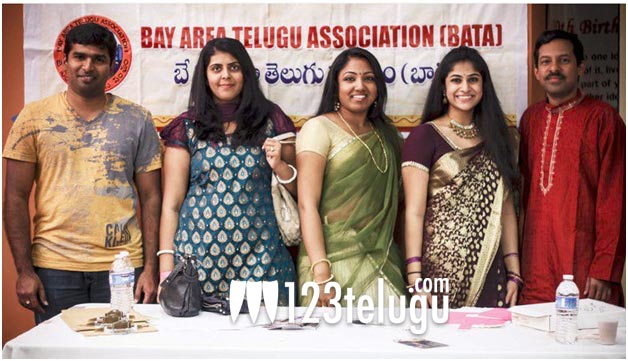 Then came the “Nanna – Nuvvu Thatha kabotunnav” – a comedy skit written and directed by Kalyan Kattamuri. Kamesh Malla, Shiva Kada and Kalyan acted in this skit which left audience in splits with one liners and anecdotes. Kalyan thanked Narasimha Rao garu for the costumes & makeup that transformed the actors to look like old parents.
A big hit last year, Sarada-Saradaga – On stage fun quiz competition followed next where 4 teams battled out 4 audio/video rounds. The close contest was thoroughly enjoyed the audience who were equally involved for the questions unanswered by the teams. The highlight was the final round where the teams had to dance to the tunes that are randomly played. Kevvu Keka team won the close contest in a tie-breaker. 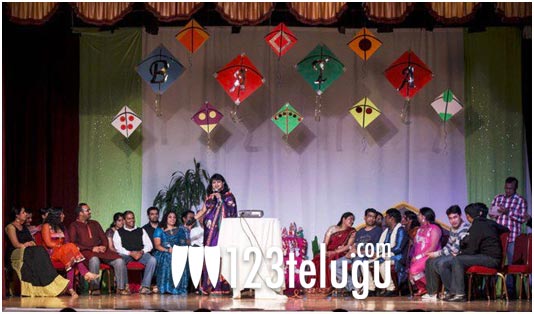