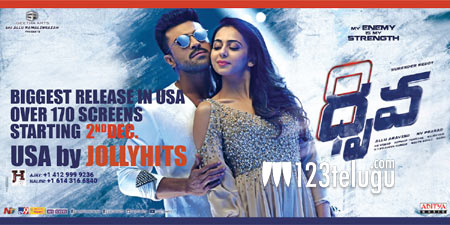 “JOLLYHITS” that distributed around 20 Kannada movies worldwide including RANGITARANGA and exhibited over 100 Tollywood Movies is now entering into distribution for the first time on larger scale with DHRUVA.

“DHRUVA” is a remake of TAMIL blockbuster THANIORUVAN has grossed around 150cr worldwide will definitely impress Overseas audience.

As many of you know, subject line runs behind a cop and a pure Thriller with many twists and interesting elements which makes movie one of a kind to watch.

Movie is directed by Surender Reddy (Kick, Racegurram Fame) and being produced by GEETHA ARTS who is known for making Lavish Movies.

Music is launched on NOV 9th composed by upcoming music director BABA TAMIZHA is already a blockbuster with 4 songs and appealing all CLASS audience high time.

DHRUVA is planned for a SOLO RELEASE over 170 screens without any competition starting DEC 02nd worldwide with Premiers on DEC 01st in USA.